(CNN)Protesters have gathered in major cities across Australia demanding justice over minority deaths in police custody in solidarity with the Black Lives Matter movement.

About 10,000 people gathered in central Sydney Saturday after a court overturned a previous injunction that ruled any protest there illegal because of social distancing restrictions. Similar demonstrations went ahead in Brisbane, Melbourne and Adelaide, with protesters waving banners and chanting “black lives matter.” The rallies were organized by indigenous rights groups — among others — under the banner “Stop Black Deaths in Custody.”

Jeremy, 27, who didn’t reveal his surname, attended the march in Sydney. “To know that I stand on the shoulders of black, queer people before me who have enabled me to live the life I lead, I had to ask myself if I was going to be the ancestor that people after me needed me to be,” he told CNN. “Change needs to happen … I want to see it at its grass-roots level, see it in the education system, with people in power. What I want to see is that we haven’t come this far for everything that’s come before us to mean nothing.” 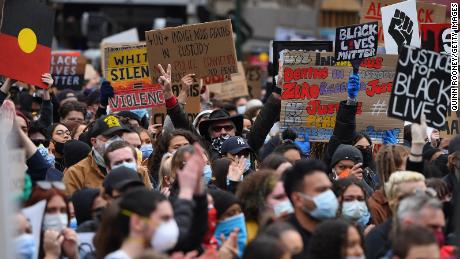 Protesters in Melbourne, Australia.Read MoreA common plightProtesters rallying outside Sydney’s Town Hall called for justice for David Dungay, an Aboriginal man who died in a Sydney prison in 2015. His case has drawn parallels with George Floyd’s death at the hands of police in the US. Like Floyd, Dungay’s family say his last words were, “I can’t breathe.”Dungay, who was schizophrenic and diabetic, died in Long Bay Prison Hospital after he was overpowered and restrained by at least four prison officers, according to a press release sent to CNN by his family’s lawyer, George Newhouse, of the National Justice Project.Dungay’s family is calling for criminal charges to be brought against the correctional officers involved in his case. 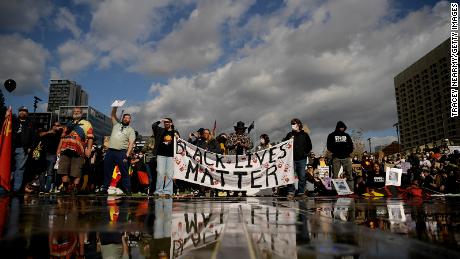 Protesters march in Adelaide, Australia.Australia’s indigenous population — composed of mainland Aboriginal people and Torres Strait Islanders — makes up 2.4% of the country’s 25 million people, yet accounts for more than a quarter of its total prisoner population. ​Analysis from Change the Record, an Aboriginal-led justice coalition, found that there have been 449 indigenous deaths in custody between 1980 and 2011, which represents 24% of all deaths in custody over that period.”There’s so many modern parallels with what’s going on in Australia and the United States,” Sudanese-Australian activist and author Yassmin Abdel-Magied previously told CNN. ​”It’s the same institutionalized racism, it’s the same black deaths in custody and police getting away with it with impunity.” Police apologize for arrestThe protests in Australia come after a 17-year-old indigenous boy was injured by a policeman in Sydney on Monday.Speaking at a press conference on Wednesday, the boy’s mother, father and sister — who asked not to be named by the media — said the actions of the junior constable, who arrested and later freed their son without charge, were “dangerous and uncalled for.” They have called for charges to be brought against the officer. Video taken by an onlooker shows the junior constable kick the boy’s legs out from underneath him and pin him to the ground with the help of two other officers.

“Watching this video as a family and seeing the appalling way this adult arrested a compliant child is chilling. The use of excessive force is unnecessary and irresponsible,” the boy’s sister said. The officer has been placed on restricted duties while the case is reviewed by the NSW Police Standards Command. Earlier on Wednesday, NSW Police Commissioner Mick Fuller said he was “absolutely” sorry for the incident.