Daniel Werner did not want his first engine swap to be tame. He wanted something big. Not some LS-swapped whatever, big for a Miata but puny on the broad spectrum of internal combustion. He wanted something no car motor could provide. He considered a 37-liter Rolls-Royce Griffon engine, a massive thing plucked from a Spitfire fighter plane. But that’d be ridiculous, far too big for a car. Cooler heads prevailed; he went with a comparatively tidy 27-liter Meteor engine from a World War II–era tank.

“It’s not an intelligent choice of engine if you want to have 250o horsepower and race. This is more just, I wanted to do this out of pure passion,” Werner told Road & Track.

So Many Ways to Appreciate the Crown Vic


One of the Last Crown Vic Cop Cars in Service


History of the Ford Crown Victoria 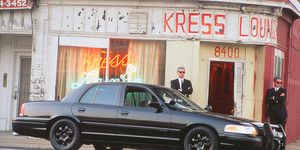 Living in Sweden, a country dominated by 2.0-liter hatchbacks and tight emissions controls, Werner was always enamored with big-engine forbidden fruit—V-8 muscle cars, sure, but also wilder stuff. He knew he needed to scratch that itch, so he started searching for a suitable engine. The 37-liter Griffon was too unwieldy and could be tough to come by in the region, but Meteor-powered Swedish tanks were comparatively plentiful. Since Sweden hasn’t had much need for tanks in the past decades, the country always has surplus engines.