Sao Paulo, Brazil (CNN)In Brazil’s largest and most badly infected city, coronavirus has yet to peak, yet already the healthcare system is crumbling visibly around us. As doctors struggle valiantly to save lives, the country’s President, Jair Bolsonaro, seems more focused on another sick patient: his country’s economy.

Brazil this week became the country with the second most infections worldwide after the United States, with more than 330,000 confirmed cases. But Bolsonaro, who once dismissed Covid-19 as a “little flu,” has urged businesses to reopen, despite many governors stressing social isolation measures to slow the spread.In the huge intensive care unit (ICU) of Emilio Ribas Infectious Disease Institute in São Paulo, anger swirls among doctors when asked about their President’s comments. “Revolting,” says one. “Irrelevant” declares another. 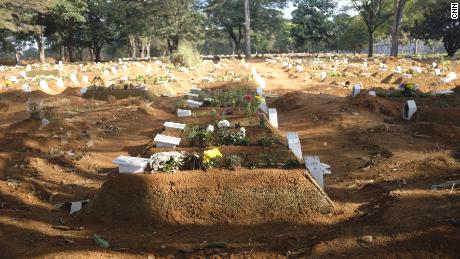 The Vila Formosa cemetery in Sao Paulo has dug thousands of new graves since the pandemic began.Dr. Jacques Sztajnbok is more restrained. “It’s not a flu. It’s the worst thing we have ever faced in our professional lives.” His eyes slow and narrow, when I ask if he worries for his health. “Yes,” he says, twice.The reasons why are clear inside the overwhelming silence of the ICU. Coronavirus kills behind the veil of a hospital curtain, in a stifling quiet, that is so distant and alien to the global upheaval and noisy political divisions it has inspired. But when it takes a life, it is intimately horrifying.Read MoreThe first noticeable break in the calm is a flashing red light. The second, a doctor’s hair cover, moving up and down just above a privacy screen, as his rigid arms deliver hard, unforgiving chest compressions to a patient. The patient is in her 40s, and her medical history has meant for days the odds on her survival are bad. But the change, when it comes, is sudden. 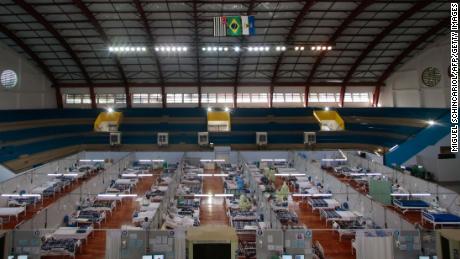 Brazil now has the second-highest number of coronavirus cases in the world after US Another nurse runs in. In this ICU, the medical staff pause in an outer chamber to gown up and wash, but only moments before racing in. In the corridor outside, a doctor fumbles, clumsily pulling on his gown. These moments have come countless times before in the pandemic but, this day, it gets no easier. This ICU is full, and still the peak in São Paulo is probably two weeks away.Through the glass, gowned staff jostle tightly together and circle the patient’s head; to replace tubes; to shift posture; to switch their position and relieve each other from the exhausting task. Their unforgiving compressions on the patients’ sternum are all that keep her alive.A doctor emerges, sweat on her brow, to pause in the cooler, corridor air. A sliding glass door slams — a rare noise — as another rushes in. For 40 minutes, the quietly frenetic focus continues. And then, without audible warning, it suddenly stops. The lines on the heart monitors are flat, permanently.Coronavirus has so pervasively damaged our life, but its way of killing remains so often hidden in the confines of ICUs, where only valiant healthcare workers see the trauma. And for the staff here, it feels closer daily. Two days before our visit, they lost a nurse colleague Mercia Alves, 28 years in the job. Today, they stand together at the glass of another isolation room, inside which is a doctor on their team, intubated. Another colleague tested positive that day. The disease that has filled their hospital seems to be moving in on them. 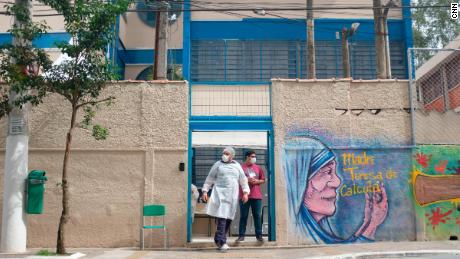 A school in the sprawling favela of Paraisopolis is being used as an isolation center for people with coronavirus. Emilio Ribas hospital is full of bad tidings — with no more bed space before the peak hits, and staff already dying from the virus — but is the best-equipped the city of São Paulo has. And that is a dark harbinger for Brazil’s weeks ahead. Its biggest city is its wealthiest, where the local governor has insisted on a lockdown and face masks. Yet still the deaths number almost 6,000 and the more than 76,000 confirmed cases are chilling indications of what — even in likely the best-prepared place in Brazil — is to come. Wealth not health preoccupies Bolsonaro, who has recently started calling the fight against the virus a “war.” But on May 14, he said: “We have to be brave to face this virus. Are people dying? Yes they are, and I regret that. But many more are going to die if the economy continues to be destroyed because of these [lockdown] measures.”Disease rampant in favelas Across town, in the favelas there is no debate. Having next to nothing is commonplace, and has brought its own form of isolation from the rest of the city some time ago. But the priority here has long been clear: survival. Renata Alves laughs, shakes her head, and says “it’s irrelevant,” when asked about Bolsonaro’s opinion the virus is just a “cold.” Her business is serious, and hourly. 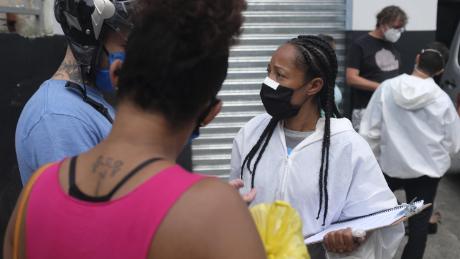 “Cases can be tough,” says Renata Alves, a volunteer health worker with the G10 Favela aid group. Around her, the urgent tasks of staying alive hum. In one room, rows of sewing machines are laid out, where women are taught how to go back to their streets and start making masks from anything they can find. In another, 10,000 meals are brought in, prepared, and then shipped out again, in tiny numbers, to streets unable to put food on their own tables in the lockdown. Alves, a volunteer health worker with the G10 Favela aid group, heads out to one of the worst-affected areas of the Paraisopolis suburb. Its narrow dense streets and alleyways explain why the disease here is so rampant. And Alves realizes that she knows only half the picture among a potential 100,000 patients. Only when someone has three symptoms, is she allowed to offer them a Covid-19 test, and even that is paid for here by a private donor. Many cases go undetected. 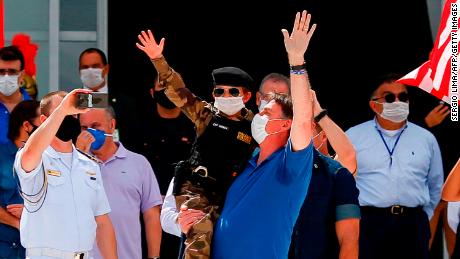 As hospitals in Brazil teeter on the brink of collapse, Bolsonaro does pushups with supporters “Mostly the test is done when the person is already in an advanced stage of the disease,” she says, as she heads into the home of Sabrina, an asthmatic isolating with her three children in three tiny rooms. The doctors use a wooden swab to check the back of her throat with a flashlight, and greet her bored, bewildered children, before moving on. “Cases can be tough,” Alves tells me. “One obese woman needed eight people to carry her to our ambulance. And a man with Alzheimer’s …we had to ask the family if we could physically remove him from his home. It’s hard.” The woman survived, the man died. High above the packed street — thronging when everyone seems to come out to meet the trash removal lorry — is Maria Rosa da Silva. The 53-year-old says she thinks she got the virus from going to the market here, even though she wore a mask and gloves. So she’s “locked away,” three floors up on her leafy terrace, without railings. Social distancing seems only possible here if you do it vertically. “People like me in the risk group are dying,” she stresses. “Even yesterday the owner of the pharmacy died. Many are losing their lives due to someone’s carelessness. If it’s for the good of society, we have to do this.” 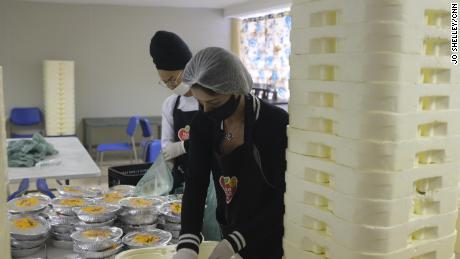 Volunteers prepare some of the 10,000 meals that are handed out to residents of the Paraisopolis favela each day, so they don’t need to leave their houses to eat. Social responsibility in these dangerous and poor streets has also led to an isolation center being made nearby from a deserted school. The government gave over the building to a privately funded project, which now has dozens of patients inside. It is ready, with sparkling uniform dormitories monitored by CCTV, for many more. Other signs of readiness are less comforting. In the hills above São Paulo, the Vila Formosa graveyard brims with mourning, and yawns in expectation — lined with endless empty and fresh graves. A funeral seems to occur every 10 minutes and even that makes no dent in the numerous new holes dug in the red dust.Brazil had a headstart — for at least two months it watched the coronavirus tragedy sweep the world.

But the incontrovertible evidence around the world of the disease’s horror, has instead resulted in mixed messages from the government. And the death toll and data set of new cases — ghastly as they are — likely fail to reflect the entirety of the tragedy already underway. What has happened already elsewhere — and sent warning flares up around the planet — is happening here, all the same, and may well be worse.