(CNN)More than 20 states will be under the threat of severe storms this weekend.

A cold front stretching from Colorado to Massachusetts is expected to produce heavy rain and strong thunderstorms. Damaging winds and hail will pose the biggest risks, and even a tornado can’t be ruled out.A powerful line of storms swept through the Midwest late Friday night, affecting major cities like Chicago. The squall line was over 300 miles long as it carved its way across multiple states producing wind gusts over 70 mph. Damaging winds downed trees and power lines from Colorado all the way to Ohio on Friday and early Saturday. Flooding also occurred as a result of these storms, which brought heavy downpours that overflowed creeks and streams in some low lying areas.

Check your local weekend forecast hereExpect severe storms in the NortheastRead MoreThe same system that affected the Midwest on Friday will shift to the Northeast on Saturday. The strongest storms will form from eastern Ohio to western Connecticut, where the National Weather Service’s Storm Prediction Center has issued a forecast that calls for a slight risk of severe weather.Newark, New Jersey, New York, Philadelphia and Pittsburgh should expect damaging winds and even hail. An isolated tornado cannot be ruled out. 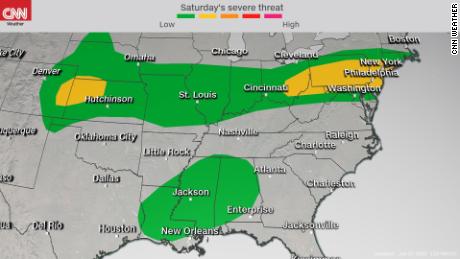 Severe storms SaturdayOther cities on the fringe of the system could see some strong storms, including Denver, St. Louis, and Indianapolis.The Storm Prediction Center said the threat will likely peak in the late afternoon before waning in the evening.It’ll also be rainy in the SoutheastThe Southeast is expected to see some wet weather as well.”An unrelated system in the South will also trigger scattered thunderstorms, which could reach severe thresholds,” said Taylor Ward, CNN meteorologist. Birmingham, Alabama, and Jackson, Mississippi should prepare for the possibility of damaging wind and even hail.The Storm Prediction Center said the threat of strong thunderstorms should subside by early evening.Severe storms continue on SundaySevere weather chances continue on Sunday with the highest risk existing for the Carolinas and portions of Virginia. Damaging winds and hail will be the main threats.

There will also be some stronger storms that exist to the north from Washington, DC through New England with potential damaging winds for cities like Boston, New York, and Hartford, Connecticut. 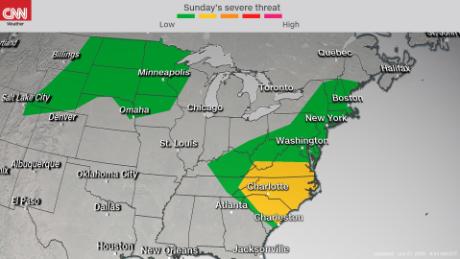 Farther west in the northern Plains and Midwest, there’s also potential for strong storms. This region will have threats of damaging winds, but also the potential for an isolated tornado for cities like Minneapolis and Omaha, Nebraska.