For July’s issue, we compiled a list of the most important cars ever built, and worked forward from 1955, when we were founded as Sports Car Illustrated, and the modern auto industry came of age. These are Car and Driver’s GOATS – the Greatest of All Time. Today: The Seventies. 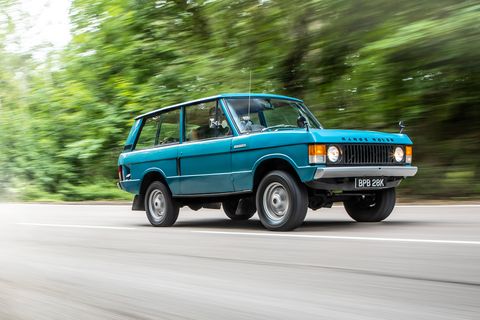 From The C/D Archives

Shortly after its European debut in 1970, British Leyland’s Range Rover became a museum piece—the first vehicle to be displayed at the Louvre in Paris. It was featured there as an “exemplary work of industrial design,” which would prove to be a prophetic accolade considering its lasting influence. Rover had set out to match the success of the Jeep Wagoneer and Ford Bronco with a luxury bent. In doing so, the company cast the mold for a vehicle as good in the wild as it was running errands. The Range Rover was powered by a Buick-designed V-8 planned for powerboats and first used in compact sedans in 1961. It was as comfortable in the types of places where you slept on the ground as it was on the meandering highways that led you there. Capable, too. The Rover would go on to complete the 18,000-mile British Trans-Americas Expedition in 1971–72, win the inaugural Paris-Dakar Rally in 1979, and accomplish innumerable grocery runs of varying difficulty. The Range Rover didn’t officially arrive in the U.S. until 1987, by which time it was underpowered and overpriced. Its age threatened to undermine the foothold that gray-market examples had established here in the ’70s. And yet, today’s Cayennes, X3s, and GLEs all owe something to the original Range Rover. Without it, those utes might not be as luxurious as they are. —Austin Irwin