From the September 1992 issue of Car and Driver.

“Although the past may not repeat itself, it does rhyme.” -Mark Twain

If, like us, your recollection of automotive lore‑the firing order of a 1970 Boss 302, for example—exceeds your recollection of ninth-grade algebra, then the green and yellow livery of this Lotus Esprit Turbo SE should rhyme. Okay, so it’s more Ginsberg than Frost. But it should at least set to murmuring a tiny voice in your head that says, “I’ve seen this before.”

And you have. Although you may not see it again, because Lotus will build only twenty of the Esprit Jim Clark Limited Editions pictured here.

With the exception of the Lamborghini Diablo and, well, a Trabant, this rare and gaudy Lotus draws more comments than any car we have recently tested. Five teenagers in Hardee’s parking lot jump, twitch, and fidget, waiting impatiently for the driver to return. They ask, “How much, how fast, how come?” 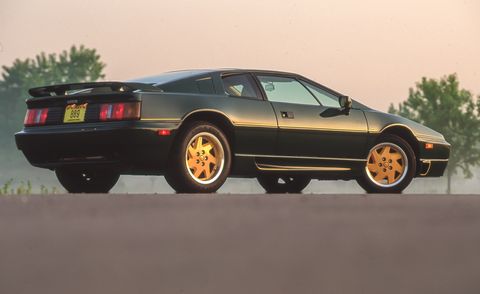 Good questions. What is the attraction? It may be this car’s seductive, enduring shape, which has cut a cuneiform figure since its styling genesis in 1975. It may be the hen’s-tooth rarity of the Lotus name—only 150 Esprits were sold here last year. Or it may be the fluorescent-yellow pinstripes and chrome-yellow wheels affixed to a fiberglass body slathered in BRG.

Which is what makes this Esprit familiar. If you are 30-something, you will know that BRG stands for British racing green, a hue most closely associated with Lotus’s racing cars—notably the classic models 25 and 38. It was the mid-engined 38 that won the 1965 Indy 500 with Scotsman Jim Clark aboard. That none of us witnessed any front­-engined cars clouting the wall during this year’s Indy foot-smashing festival is largely the handiwork of Lotus and Clark, the Lewis and Clark of aft-engined racing cars.