(CNN)As businesses struggle to stay afloat during the pandemic and a record number of Americans have lost their jobs, one small city in Washington state put forth a creative solution to help its neediest residents pull through: printing their own money, out of wood.

In Tenino — a community of less than 2,000 people halfway between Seattle and Portland — residents who can demonstrate an economic hardship caused by the pandemic can receive up to $300 a month in wooden dollars, subsidized by a City Hall grant program. The bills are made of wood veneer and are each worth $25. They can be used to purchase necessities and services from licensed or certified providers, as specified in the guidelines by Tenino’s City Hall.

The wooden dollars cannot be redeemed for cash — the maximum change allowed is 99 cents — and they can’t be used to purchase alcoholic beverages, tobacco or marijuana, which is legal in Washington state.Many stores and restaurants in Tenino now accept this alternative currency, which they can exchange for US Dollars at City Hall.Read More”We basically treat the wood money just like cash,” Chris Hamilton, the store manager at Tenino Market Fresh, told CNN. People have used the wooden bills to purchase groceries and home repair items at his shop. 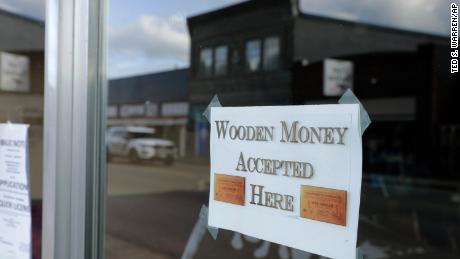 A sign on a business in Tenino, Washington, says they will be accepting wooden money.”With so many people having financial troubles right now and not being able to work, it definitely helps,” he added.”The nice thing is it keeps the business in town,” Hamilton said. “The currency is only good in Tenino, so it helps promote the small town and keep business local. It’s a two-fold win for people.”Tenino has printed $10,000 worth of wooden bills for the time being, and so far about a dozen people have qualified to participate in the program, according to Tenino’s Mayor Wayne Fournier.”I think people enjoy it and they appreciate it,” Fournier told CNN. “There’s a direct, quantifiable economic aspect to it, but then also an intangible spirit of creating hope,” he added.Local communities the size of Tenino’s face bigger hurdles when it comes to receiving state and federal pandemic relief, according to Fournier, so the currency is the city’s response to the circumstances. The Latin phrase engraved on the bills is meant to translate as “we’ve got this handled,” Fournier explained.”That’s how we feel we have to do things around here, no one is coming to help. We have to step up and do it on our own.””You have to pull yourself up by the bootstraps,” Fournier said. “If we can inspire other communities to do that, we’re all going to be better off.”History revampedThis is not the first time the city of Tenino has resorted to printing its own money in times of economic hardship. It happened before, during the Great Recession.The Tenino Wooden Dollar was first printed in December 1931 when the local Citizens Bank failed and all bank accounts were frozen, according to city historian Richard Edwards. At that time, the currency was backed by the local Chamber of Commerce rather than by the local government, and was the brainchild of local newspaper publisher Don Major, who thought to use his printing press for the purpose. Residents could sign over up to 25% of their bank deposits to the Chamber of Commerce in exchange for the alternative currency, which was also made of wood, an abundantly available material in the Pacific Northwest. The first Tenino wooden currency circulated from 1931 to 1933, and later became a collectors’ item.The fact that the new version of the Tenino dollar is also printed on wood has to do with the fact that this city “is very history aware,” Edwards told CNN. 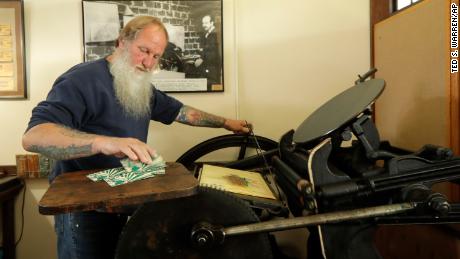 Loren Ackerman prints wooden money on an 1890s-era press in Tenino, WashingtonThe current Tenino Wooden Dollars are printed with the same newspaper press from the 1890s that was used in the 1930s with custom engraving blocks. The machine, which resides in the Tenino Depot Museum, was used over the years to produce commemorative versions of the historic Tenino Wooden Dollar for the collectors’ market, for organizations and for special events, according to Edwards.
A novel kind of scripLeonard Augsburger, the project coordinator of the Newman Numismatic Portal at Washington University in St. Louis, told CNN that currency alternatives and scrip were very popular during the Depression era, especially after the 1933 Bank Holiday ordered by President Roosevelt.”There were thousands of various scrip issues during the Depression, a lot of times coming from local municipalities, chambers of commerce, boards of education, or companies. They were all over the country and people were used to seeing them,” Augsburger said.”They had by and large disappeared once people had confidence in the banks and the regular money supply was back to normal.” The 2020 Tenino Wooden Dollar is “really intriguing,” according to Augsburger, because it’s not quite the same as its Depression-era ancestor.”This is sort of more akin to food stamps, where the government gives you certificates that are directly redeemable for food and primary needs.”While government assistance through social programs is well-established, the Tenino Wooden Dollar is a more direct way for a local government to provide direct aid to individuals while supporting local commerce, according to Augsburger.”To see this done on a very local basis is novel.” 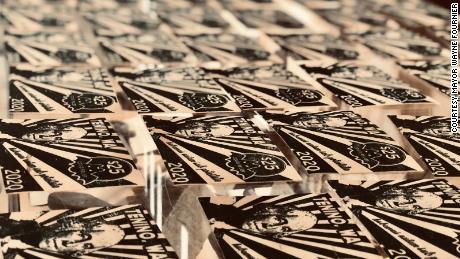 The $25 currency in Tenino, Washington is made of wood veneerIs it legal?The authority to print money resides with the federal government, and US Dollars are the only legal tender in the country.But is Tenino actually printing money? Jesse Kraft, an assistant curator at the American Numismatic Society, doesn’t think so. “No one is going to be held accountable for this because they are not actually creating money, as it’s legally defined. These are just tokens that are creating an economic stimulus,” Kraft told CNN.”It begs the question: what is money? It really is just something that someone is willing to spend and the other person is willing to accept,” Kraft added.It’s unlikely the federal government would worry about the Tenino currency unless it became much more widely used, according to Augsburger.”I don’t think that it would be prosecuted unless it really ramped up to a very, very large scale,” he said.”We know we are pushing the envelope,” Tenino Mayor Fournier told CNN. Fournier quoted Supreme Court Justice Louis Brandeis’ interpretation of the freedom of states to “serve as a laboratory; and try novel social economic experiments without risk to the rest of the country,” and the Tenth Amendment, which limits the federal government’s powers to those expressly granted by the Constitution.Based on these tenets, Fournier told CNN Tenino’s micro currency experiment is “as American as apple pie.”Creativity beyond bordersAs American as it is, the Tenino experiment is receiving attention not just from other states around the country, but from all over the world, the mayor said. He has fielded media inquiries from Canada, New Zealand and Norway in recent days. “The global interest in this story is amazing and I sincerely hope it inspires other communities to try bold new ideas,” Fournier told CNN.The attention has also brought about donations from benefactors both foreign and domestic, according to Fournier. “The generosity has been amazing.”Others are getting in touch to purchase Tenino Wooden Dollars as collectibles.”We’re getting bombarded with requests from out of the city folks that want to purchase them, and they’re offering like seven times the face value.”If Tenino residents were to resell their wooden dollars for a profit, Fournier would still feel like the currency met its stated purpose.”I still think you’ve directly helped an individual that’s been harmed by the pandemic.”

His hope is for those profits to be reinvested in the local community.”We preach localism like a religion,” Fournier said.