(CNN)Seattle police want to resume operations at a downtown precinct they left empty as protesters began occupying the area around it.

The area around the precinct is now occupied by protesters, some of whom are calling it the Capitol Hill Autonomous Zone. According to CNN affiliate KOMO, police boarded up the East Precinct building in the Capitol Hill neighborhood and left it unoccupied during protests over the police killing of George Floyd in Minneapolis. Protesters have also hung signs on the East Precinct, KOMO reported, some of which read “Seattle People Department” and “The Property of the People.”

But Seattle’s Mayor Jenny Durkan says the city will not be accepting federal troops to move the protesters out. “The threat to invade Seattle — to divide and incite violence in our city — is not only unwelcome, it would be illegal,” Durkan said at a Thursday press conference. She added that the majority of the protests have been peaceful. Her comments come as a response to President Donald Trump’s tweets earlier in the day. Read MorePresident Trump had tweeted to Durkan and Washington Gov. Jay Inslee, “Take back your city NOW. If you don’t do it, I will.”

Radical Left Governor @JayInslee and the Mayor of Seattle are being taunted and played at a level that our great Country has never seen before. Take back your city NOW. If you don’t do it, I will. This is not a game. These ugly Anarchists must be stopped IMMEDIATELY. MOVE FAST!

But Durkan responded by saying, “One of the things this president will never understand is that listening to the community is not a weakness. It’s a strength.”Meanwhile, the Seattle police chief is openly criticizing city leaders for evacuating the Third Precinct building in the city’s Capitol Hill district. “You should know, leaving the precinct was not my decision,” Police Chief Carmen Best said in a video addressed to the members of the department. The video was posted on the police department’s YouTube page on Thursday.Chief Best added that the city “had other plans for the building and relented to severe public pressure,” and expressed her anger at how all this came about. She said officers spent days protecting the building before the city boarded it up.Earlier, in a news conference Wednesday, Assistant Police Chief Deanna Nollette said, “We’re trying to get a dialogue going so we can figure out a way to resolve this without unduly impacting the citizens and the businesses that are operating in that area.” 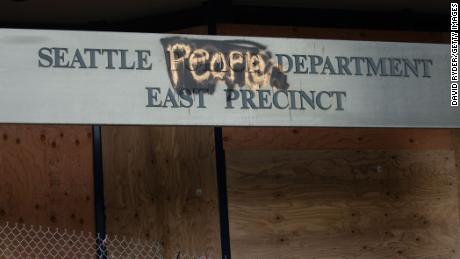 A defaced sign for the East Precinct reads “Seattle People Department” on Wednesday in Seattle.Officers are still responding to emergency calls in the area, Nollette told reporters. Nollette said police had received reports that protesters allegedly set up barricades, “with some armed individuals running them as checkpoints into the neighborhood.””While they have a constitutionally-protected right to bear arms, and while Washington is an open carry state, there is no legal right for those arms to be used to intimidate community members,” Nollette said, adding that anyone subjected to these demands should call 911. “No one at these checkpoints has the legal authority to demand identification from anyone,” he said.Nollette also said police have “heard anecdotally” of residents and businesses being asked to pay a fee if they want to operate in the area. “This is the crime of extortion,” Nollette said. “We feel incredibly strongly as a department that what happened to George Floyd was wrong and it was a crime,” she said. “We fully support efforts to improve police accountability and to work towards improved radical equity.” 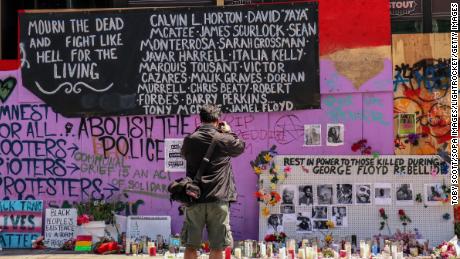 A man takes photos of a makeshift memorial in the so-called “Capitol Hill Autonomous Zone” in Seattle.On Thursday Washington Gov. Jay Inslee said the Capitol Hill protests were mostly peaceful.”Although unpermitted, and we should remember we are still in a pandemic, the area is largely peaceful,” he said. “Peaceful protests are fundamentally American, and I am hopeful there will be a peaceful resolution.” ‘An anti-racist zone’Protesters in the area plan to stay as long as it takes to affect change, according to KOMO. Many said they wanted to defund the police department.One protester, identified only as Rooks, told KOMO that the protesters were not violent. “It’s nothing aggressive or violent or nothing like that,” Rooks said. “We didn’t come out here for any of that. All we wanted was what is equal and what is right.”Some residents and business owners said they were concerned, KOMO reported, but others weren’t, like Christopher Derrah, who lives nearby. “There’s people having teach-ins, talks, political discussions,” he said. Kate VanPetten, who works at a nearby coffee shop, told CNN affiliate KIRO the CHAZ was “an anti-racist zone,” and that her business has been supporting the movement. “We’ve been setting out free coffee for the protesters and doing everything we can to support them,” she said. 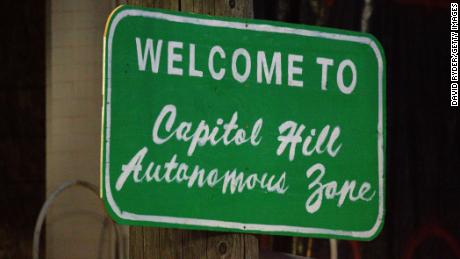 A sign welcomes visitors to the so-called “Capitol Hill Autonomous Zone” on Wednesday.The situation in Seattle has drawn the attention of President Donald Trump, who tweeted Wednesday night that the city’s mayor and Inslee “are being taunted and played at a level that our great Country has never seen before. Take back your city NOW. If you don’t do it, I will.” “These ugly Anarchists must be stooped (sic) IMMEDIATELY,” the President said, later adding that “Domestic Terrorists have taken over Seattle, run by Radical Left Democrats, of course.” In response, Inslee told the President to “stoop tweeting.” He followed up Thursday, saying, “What we will not allow are threats of military violence against Washingtonians coming from the White House.” Seattle officials say there is no indication the occupied area is being coordinated by left-wing groups under the umbrella of Antifa.

“City officials have not interacted with ‘armed Antifa militants’ at this site, but will continue to be on site to monitor the situation closely,” city spokeswoman Lori Patrick said in a statement.It’s unclear who is leading the protesters, but Nollette said Wednesday that police were working to find a point of contact to establish a line of communication.