Rio de Janeiro (CNN)Coronavirus rages on the edges of Rio de Janeiro — in the hills and slums run by drug gangs, where police dare not go unless on an armed raid.

Absent of help from the state — President Jair Bolsonaro has pledged to crush criminals “like cockroaches” — the gangs have stepped up. Where before they peddled narcotics with the rule of the gun, now they also push curfews, social distancing and food handouts for the neediest.”We fear the virus, not Bolsonaro,” said Ronaldo, a gang member who, like most people interviewed, either requested anonymity or gave a false name. “We can’t count exactly how many have already died. The hospitals kill more than if you stay home and take care of yourself.” 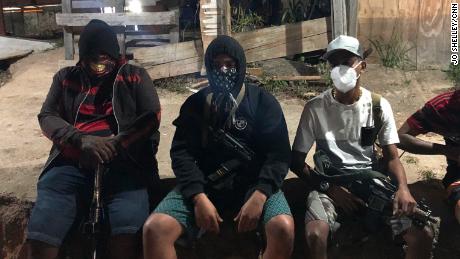 Young dealers, not state medical personnel, are the ones encouraging measures against coronavirus in the favela.A drug gang granted CNN access one of Rio’s poorest and most socially isolated communities, to illustrate how it has dealt with Covid-19. It’s an area inaccessible to state healthcare. Alcohol gel, medication and cash handouts are all part of a system that gang members were eager to display, with Brazil now the country with the second highest number of coronavirus infections behind the United States, and where cases are still doubling every two weeks.Four young men climb off their motorbikes and begin to lift large plastic bags from the back of a pickup truck. The first package of groceries goes to a manicurist who has been out of work for four months. The second goes to a street vendor. Read More 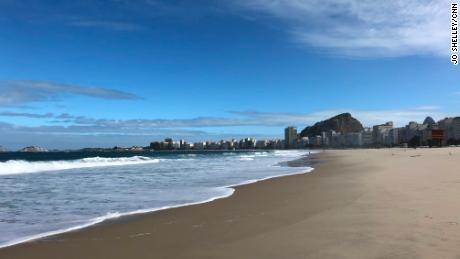 World-famous beach emptied by coronavirus”Things are getting very difficult,” said the street vendor, who requested anonymity. She says she is trying to set up a stall in the community, but there is nobody to buy her products.

“I’m trying at least,” she said. “Kids and lots of people are getting sick. The food they’re giving us helps a lot.”She says her father-in-law died in April from Covid-19. He seemed stable, she adds, until he was transferred to hospital, where he died within the day. “Until now we didn’t get a full report on what happened, except that it was Covid-19,” she said. “It took two weeks for him to be buried.”She says that her uncle is now sick and hospitalized, having caught the virus while at his supermarket job. 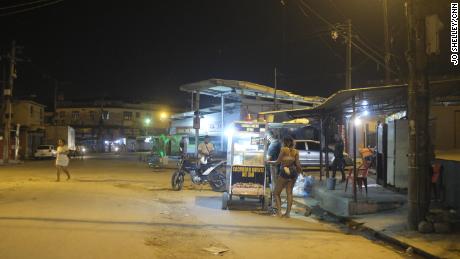 The streets are quieter than usual but still the only government workers that dare come are police on an armed raid.Medical help is available in the community, and hospitalizations are rare. “Doctors from the community are helping the sick people voluntarily,” Ronaldo said. “The people who have money can get assistance. The ones who haven’t just can’t.” The local community sometimes chips in to pay for burials, says Ronaldo.”The isolation was going well here but now even the President himself — in his own words — is disregarding it,” Ronaldo said. “But we can’t ease it. We’ve seen a lot of death. We know it’s not a small thing.”

As he spoke, two teenagers played pool nearby. Many here violate the social-distancing rules, like they do on the wealthier coast below. 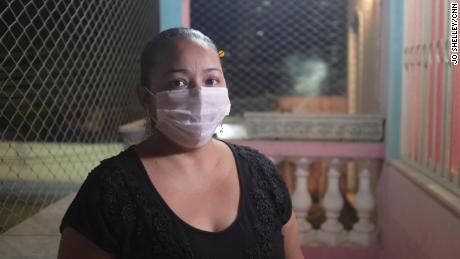 Nurse leader accuses Brazil of sacrificing medics to coronavirus”It’s complicated to enforce quarantine on people,” Ronaldo said. These drug dealers — young and armed with old semi-automatic rifles, short-barreled M4s and, in Ronaldo’s case, a Glock pistol adapted into a rifle — have become as knowledgeable about Covid-19 as they are about narcotics. When asked if they would accept any of the two million doses of hydroxychloroquine that the United States has agreed to send Brazil — despite the drug being ruled ineffective against Covid-19, and perhaps dangerous by the World Health Organization — Ronaldo replies:”I don’t think hydroxychloroquine helps. It’s BS. Everything that comes to Brazil from abroad has already been contaminated.” 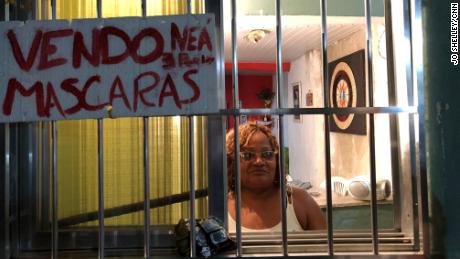 Unable to work as a hairdresser because of Covid-19, Neia has started making and selling masks.The streets seem busy for curfew. Bars are closed, however, and business has adapted to the pandemic. Neia, a hairdresser before the pandemic, has turned to making masks. She sells them through her front window, which allows her to stay inside. They’re free for children, and three face masks cost 10 reals (about US$1.75) for adults. But Neia says that drug dealers give her 15 reals. “I am more afraid of the virus than anything else here,” she said. “An elderly man who lives there (next to her home) died. People in general are respecting isolation.”

Crime has often cut this community off from the rest of Rio. Police regularly raid the area, as part of Bolsonaro’s crackdown on favelas. He has said that a policeman who does not kill is not a real policeman. And the resulting uptick in deadly operations has led to outcry from human rights advocates. The most recent raid near this favela occurred ten days ago and left at least seven dead. The signs another raid may be on its way are everywhere: a big rock blocks a road, the sound of firecrackers from a rooftop — a warning that a lookout has seen something strange, and the police may be coming again. 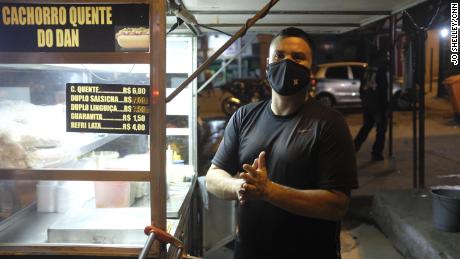 Food seller Daniel says death is all around the slum.Nearly everyone we spoke to had a story of death or infection from coronavirus. Daniel, who runs a street food stall, told stories of deaths he had heard of as he prepared pastels. “Today there was a girl who lives nearby who died,” he said, adding a friend of his with diabetes and a heart condition also died suddenly at home. The street he lives on has seen two deaths, he says. 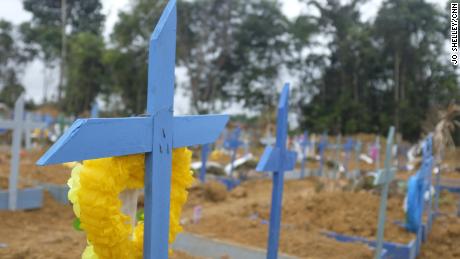 Scenes from inside Brazil's worst-hit city”There’s less movement in the streets,” Daniel said. “I wash my hands here all the time. I use hand gel, masks and clean the stall a lot.” The dealers have barred restaurants from putting tables out, he says. “The virus is in control here,” Daniel said. “Even the dealers are afraid. It’s not possible to control everybody.”The motorcycles whizz back and forth, some carrying gunmen, others ferrying teenage girls out for the night. The streets buzz with activity. At times it feels like a world before lockdowns.

But locals say it’s fairly empty. Bars, they say, would normally hum with music and drug dealing would be more prevalent. Areas like these will be an enduring concern to healthcare workers as the pandemic grows. The state will know little about how the virus has spread in these communities. Residents here may live apart from wealthier Rio neighborhoods, but many work there, nonetheless, and may spread the virus. Firecrackers suddenly crackle again, and a lookout fears the police are on their way.