The appeal stems from the criminal case against Kraft, 78, who was charged with two misdemeanor counts of soliciting prostitution in February 2019. The powerful NFL owner was one of dozens of spa patrons allegedly caught on secret cameras receiving illicit massages at the spa in January 2019.Kraft’s attorneys challenged the validity of the search warrant that let authorities install hidden cameras inside the spa, saying it violated his Fourth Amendment rights and Florida law. A Palm Beach County judge agreed in May 2019 and ruled to suppress the video, effectively gutting the criminal case against him.

On Tuesday, Florida Deputy Solicitor General Jeffrey DeSousa asked the West Palm Beach Florida’s Fourth District Court of Appeal to reverse that decision and defended the search warrant.”These cases began when law enforcement working across several Florida counties learned that there was rampant prostitution occurring in local massage parlors and in response to that revelation police did precisely what the law requires. They went out and they got a warrant,” DeSousa told the three-judge panel. Read More”But the lower courts have now suppressed the entirety of the video evidence against each of these defendants, thereby endangering the state’s efforts to prosecute felony prostitution offenses, racketeering and human trafficking charges, and a slew of misdemeanors directed at members of our community who patronized those illicit businesses and therefore created the demand for them,” he argued.Kraft team argues to suppress videoKraft’s defense attorney Derek Schaffer focused his argument on the lack of “minimization,” saying that police didn’t do enough to minimize the extent of the surveillance they were conducting at the day spa. 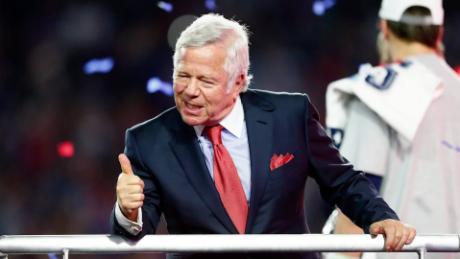 Patriots owner Robert Kraft charged with soliciting prostitution on day of AFC title game”You have a total failure to do anything that anyone would recognize as minimizing when it came to recording. These cameras that were put into private massage rooms for patrons would be undressing as a matter of course, they recorded everything without interruption for five days straight,” Schaffer argued on behalf of Kraft. “Running across the state’s bid for reversal in all these cases is the specter of the police state. One where police can inject the most invasive forms of surveillance into the most sensitive and private of settings to investigate the most mundane offenses,” Schaffer argued. The panel did not rule today, and court is adjourned until next week.

Kraft had pleaded not guilty to the charges and offered an apology.”I am truly sorry,” Kraft said in a statement. “I know I have hurt and disappointed my family, my close friends, my co-workers, our fans and many others who rightfully hold me to a higher standard.”