(CNN)A Virginia police department and the FBI are investigating a possible cross burning at the home of a 17-year-old activist the morning after he helped organize a Black Lives Matter protest.

Travon Brown of Marion, Virginia, helped New Panthers — a BLM movement group — organize an anti-racism protest on Saturday. The following morning, Brown was away from home when his mother texted him asking if he was okay. Someone had burned a cross on their front yard, she told him.

“My mother said she walked to the store and not even 15 minutes of her coming back someone had pulled up and burnt a cross,” Brown told CNN. Witnesses saw an intense fire coming from a barrel on Brown’s front yard early Sunday, according to a Marion Police Department press release. When officers extinguished the fire, they found “wood that appeared to be in the shape of a cross,” according to the press release.Read MorePolice say they are investigating the incident with the help of the Smyth County Sheriff’s Department and the FBI.”The Town of Marion Police Department is absolutely committed to ensuring that people of color in our community are safe,” Marion Police Chief John Clair said in a statement. “Our department, along with Smyth County Sheriff’s office and federal authorities, will conduct and full and thorough investigation.”The FBI confirmed to CNN that they are working with police but declined to give further details, citing an open investigation.New to activismBrown attended his first Black Lives Matter protests in nearby Johnson City, Tennessee, in early June. After protesting for six consecutive days, and inspired by the activism he saw, Brown decided to organize a march in Marion. 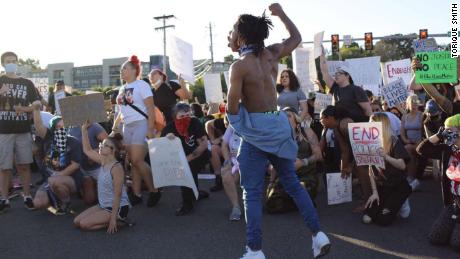 17-year-old Travon Brown speaking at Satuday’s protest in Marion, Virginia.”I started protesting because I want laws, legislation and regulations to ensure POC don’t have to deal with discrimination from the people who are here to protect and defend us,” Brown said. “From the school system to the fast food restaurants to a few cops — racism does exist here.”

Brown doesn’t know who would burn a cross on his family’s yard, but the experience hasn’t deterred him from activism.”The person that put this cross in my yard has made me stronger!” he told CNN. “It has made me want to go harder for my community.”