More on the Polestar 1


Polestar 1 Is a Concept Car Brought to Life

Nonetheless, with a starting price of $156,500 and a battery of that size, there aren’t very many other plug-ins vying for the same market the Polestar 1 is targeting. The BMW 530e is priced at $58,195 and offers 21 miles of electric-only driving range with a 12.0-kWh battery. And the Mercedes-Benz S560e, costing $110,745, has 19 miles of electric-only range with a 13.5-kWh battery. Competitors such as the Acura NSX and the Lexus LC hybrid aren’t offered with plug-in powertrains. 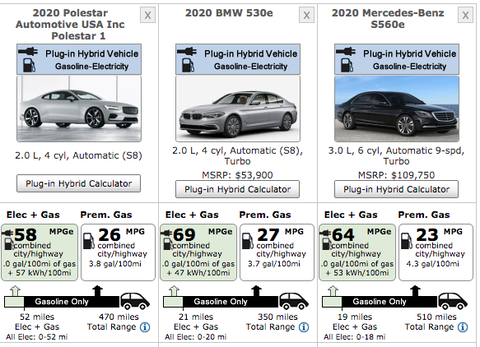 The Polestar 1’s powertrain features a turbocharged and supercharged 2.0-liter four-cylinder engine that churns out 314 horsepower and powers the front wheels. In the back, the coupe is equipped with two electric-only motors, each producing 114 horsepower. All power sources considered, the Polestar 1 puts out an impressive 619 horsepower and 738 lb-ft of torque.