(CNN)A well-traveled South Florida bridge is not at risk of imminent collapse, authorities said this week, diverging from the US Coast Guard’s warning that the bridge would soon fail.

Stuart Mayor Mike Meier said that the 24-year-old bridge will not immediately collapse, despite the Coast Guard’s cautioning on Wednesday after a large crack in the bridge was discovered. The initial warning was issued to “drive the point home that it was not safe to travel under the bridge,” Meier said. “Let me be clear: There is no evidence to suggest that the bridge will collapse imminently,” he said during a news conference Wednesday. 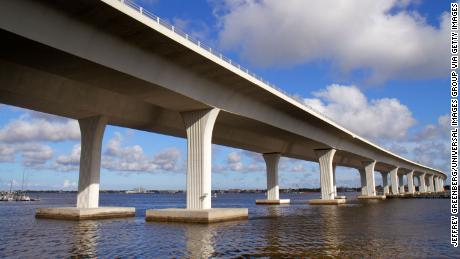 A Florida bridge is at 'risk of an imminent collapse' after a large crack appears underneathThe Florida Department of Transportation discovered the crack Tuesday during a “routine bridge inspection” that occurs every two years, the mayor said. A chunk of concrete fell off the bridge and exposed some rusted steel cables, so officials immediately blocked off a portion of Dixie Highway, also called the Old Roosevelt bridge, which crosses underneath the newer bridge. Read MoreBoth the northbound and southbound Roosevelt bridge are closed to traffic while the Department of Transportation inspects them, Meier said. Both sides showed signs of structural damage. Meier said the closures happened out of an “overabundance of caution,” though Department of Transportation officials concluded that there wasn’t a risk of immediate failure.

Boats can travel under the bridge again, where the Coast Guard had initially blocked off commercial maritime travel. But the bridge itself is still closed, and will be until further notice, Stuart police said.