(CNN)Another round of Saharan dust is forecast to move into the Gulf of Mexico later this week. The haze will blanket the Caribbean and Southern states once again, bringing poor air quality as well as the potential for remarkable sunrises and sunsets.

The dust is expected to improve as it moves across Florida this week, but likely to worsen as it reaches the Texas and Louisiana coasts. 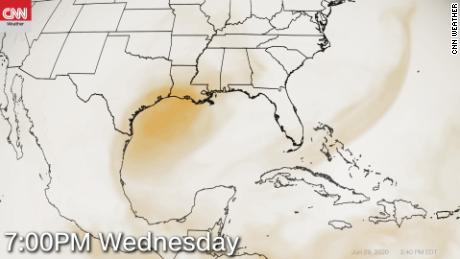 The dust will also remain in place for much of the Caribbean and Mexico.

“The concentration of last week’s dust was historic. This week’s dust is much more typical of what we see in any given year,” CNN meteorologist Judson Jones says.Saharan dust travels to the US every year. It is lifted into the atmosphere by wind and thunderstorms in Africa, as it starts a 5,000 miles journey to the Caribbean and US. This year is the worst in decades. Read MoreThe dust can white-out the sky, causing poor air quality, as seen in this before and after photo of Flagler Beach, Florida, last Friday. This next round of dust isn’t expected to be as dense as the previous one, but it will still be bad enough to bother some with allergies and asthma. According to the Georgia Department of Public Health, the dust can cause eye, nose and throat irritation.”By the time the dust cloud reaches the US, most of the larger grains have fallen out due to gravity. What is left is the smallest particles known as PM2.5. They are the most dangerous to breathe into your lungs,” CNN meteorologist Chad Myers says. However, there are some positive aspects to the Saharan dust. One is limiting the development of tropical systems in the Atlantic due to the dry air surrounding the dust.