(CNN)The family of Andres Guardado, the teenager who was shot dead by a Los Angeles County sheriff’s deputy earlier this month, will be seeking an independent autopsy, attorneys for the family said.

The family has complained about a lack of transparency and information from the sheriff’s department, which put a “security hold” on Guardado’s autopsy report from the county medical examiner. The hold means it could be some time before results are released to the public.Guardado’s death on June 18 sparked outcry across Los Angeles, with his family and others demanding justice. The shooting happened amid weeks of demonstrations following the death of George Floyd, a Black man who died at the hands of Minneapolis police in late May.

The deputies pursued Guardado after he “produced a handgun,” looked toward the deputies and ran from the front of an auto body shop, said Capt. Kent Wegener, of the LASD Homicide Bureau, after the shooting. 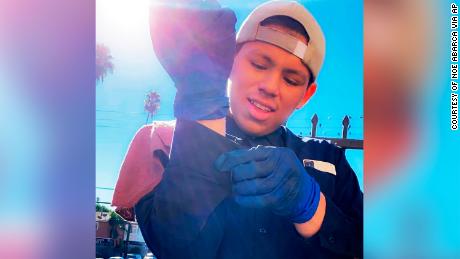 This undated photo provided by Noe Abarca shows his nephew Andres Guardado, 18.”I want to make sure this doesn’t happen to any other mother. My son wanted to be a doctor. He wanted to take care of me. Who’s going to take care of me now?” Guardado’s mother, Alicia, said in tears, speaking through a translator Tuesday.Read MoreLos Angeles County Sheriff Alex Villanueva told CNN last week that releasing the autopsy results would taint witness testimony. The hold is “not unheard of but I would say it’s unusual,” said Adam Shea, an attorney for the family, at a news conference Tuesday. Shea’s office has sent letters to the county board of supervisors and county counsel for assistance to release the report.Guardado was an informal security presence at the auto body shop and was possibly trying to learn from the mechanics, his family said.Attorneys for the family are filing government tort claims against the county and sheriff’s department. Both have 45 days to respond. Shea also anticipates filing a civil suit, the attorney said Tuesday.CNN is seeking comment from the sheriff’s department. Attorney: Deputy hasn’t spoken to investigators about the shootingMiguel Vega, the deputy who shot and killed Guardado in Gardena more than 10 days ago, has not yet spoken to investigators but is expected to do so soon, his attorney said Monday.The deputy will “give an interview in the next week to 10 days,” his attorney, Adam Marangell, told CNN on Monday.Deputy Chris Hernandez was trailing behind Vega to support as backup, their attorneys said Friday.One of the deputies fired six rounds after catching up to Guardado at the rear of the business. Guardado was hit in the upper torso and pronounced dead at the scene, Wegener said. “Guardado refused multiple commands not to reach for a gun, forcing deputy Vega to fire his weapon in fear for his life,” Marangell told CNN on Friday.Wegener said Guardado was not wearing a security uniform, nor did he have a gun belt. Guardado was also too young to work as a licensed armed security guard in California, he said. Deputies ‘are very sorry for the loss of life,’ lawyer saysTom Yu, an attorney representing Hernandez, separately recounted his client’s statement to investigators, echoing Wegener’s comments that the deputies were driving by the auto shop, where an assault had been reported a week earlier.”They were providing extra patrols in the area to ensure the safety of the citizens there,” Yu said. “They drove by and they saw a car in front, with Guardado talking to some females there outside the car. “The deputies saw the butt of a firearm sticking out of the waistband of Guardado’s pants,” Yu continued. After the deputies chased him and told him to get on the ground, “Guardado prones out, he’s on the ground but he has access to his firearm. My client can see (only) half of Guardado’s body because his view is blocked by a wall.” 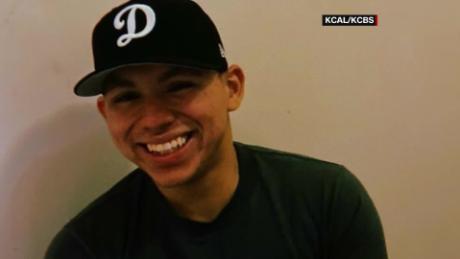 LA County Board of Supervisors calls for independent investigation into shooting death of teenager”Because Guardado is not listening to commands and reaches for the firearm, Vega is in fear for his life,” Yu added. “Vega had nowhere to go, no cover.”Yu called the incident “a justified shooting that happened at the wrong time.” “They were trying to conduct extra patrols,” Yu said. “They are very sorry for the loss of life, sorry for the (Guardado) family. They did not go to work that morning to harm people, they just wanted to go home after their shift to their families.”Attorneys representing the Guardado family disputed the claims by the deputies’ lawyers.”There is zero evidence supporting any claim that Andres Guardado was not responding to deputy commands — his death is the result of an unwarranted and unjustified killing,” Shea, the family’s attorney, told CNN. Autopsy report on ‘security hold’A makeshift shrine formed outside the auto body shop in Gardena on June 21, where mourners left bouquets of flowers, balloons, notes and pictures of Guardado. 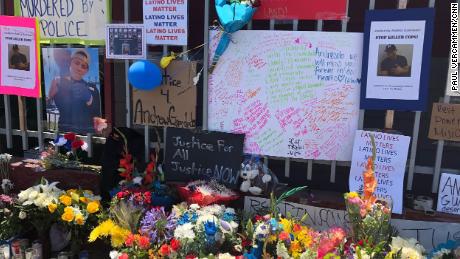 Celina Abarca and Steve Abarca say they want to know why their first cousin was shot and killed by LA County Sheriff’s deputies Thursday. A shrine is growing in front of the Gardena auto body shop where Andres Guardado was killed.”He was a baby, he was a baby,” Guardado’s cousin Celina Abarca told CNN at the time. “I don’t know — it’s still not real. I close my eyes and I hope and I pray that it’s not really happening.”As the community and his family mourn, they are also seeking answers.”The Guardado family is again requesting full transparency from the Los Angeles County Sheriff Department and the immediate release of the autopsy report,” Shea said. The hold was placed on Guardado’s autopsy report amid demands for an independent investigation into the shooting. “Since LASD placed a security hold on the case, the report and the cause of death cannot be released to the public,” Sarah Ardalani, the public information officer for the Los Angeles County Medical Examiner-Coroner’s office, told CNN on June 22.The hold could last for “months to years, depending on the investigation and the agency,” according to Ardalani.Following procedure and protocols takes time, and detectives want to hear and collect all the evidence, the sheriff told CNN last week in explaining the hold.

“They are clearly hiding information because they know they are in the wrong,” said Nicholas Yoka, a second attorney representing the Guardado family. “These statements raise more questions than answers and confirm our belief that Andres presented no threat whatsoever to these officers. We believe that once our investigation is complete, we will demonstrate beyond any doubt that this was an act of unjustified police violence against another innocent young man.”