(CNN)For months, immigrant detainees held in Farmville, Virginia, worried about the coronavirus pandemic unfolding across the United States, but within the confines of the facility, the situation appeared to be stable, with few to no cases. Then, a sudden spike.

Coronavirus cases at the Immigration and Customs Enforcement detention center in Farmville, which holds adult males, jumped to 49 cases within recent days and more people are beginning to fall ill, according to interviews with detainees at the facility and lawyers representing them. The detainees agreed to share their experience on condition CNN only refer to them by their last names out of fear of retribution.

“There are a lot of people with symptoms of fever, headache and vomiting,” Sanchez, 27, said. “When they do the count, you have to stand and there are a lot of weak people. One man fainted.” That man was taken to the medical unit then returned to the dorm shortly after, the detainee recalled. 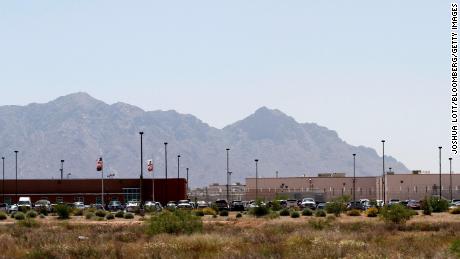 Begging for release, ICE detainees say they had to work in potentially contaminated areas as coronavirus spreads”People preparing our food are also sick and they keep sending them to the kitchen to prepare food for the inmates,” Gonzalez, 33, said. “I’m very scared right now.”Read MoreDetainees and lawyers who spoke to CNN described lack of social distancing, cloth face masks that need to be refreshed and people collapsing from illness. Nationwide, immigration detention facilities holding more than 23,000 detainees continue to reckon with the spread of coronavirus months into the pandemic. On Friday, concerns over conditions prompted a federal judge to require the release of migrant children held in ICE’s three family detention centers by mid-July. A recently released government watchdog report underscored the dramatic uptick in cases among detainees in custody since the coronavirus outbreak, starting with one case on March 25 and increasing to 1,312 on May 26. There are 751 detainees in ICE custody who have tested positive for coronavirus and are currently under isolation or monitoring and 8,858 tested overall as of Friday, according to the agency’s latest statistics.Immigrant lawyers and advocates repeatedly warned that confined spaces at facilities put men, women and children at risk of contracting the virus, despite efforts by ICE to reduce its detained population by releasing those considered most vulnerable. “We have a real fear that we may have dead clients at some point,” said Brian Casson, an immigration attorney representing four detainees at the Farmville facility. Conditions worsen at a Virginia detention facilityLawyers say that an agency effort to transfer detainees to provide for social distancing factored into the surge in cases at Farmville.ICE said in a statement that during the pandemic, “the agency has taken steps to protect detainees in its custody and promote social distancing whenever possible,” adding: “This has resulted in the transfer of detainees from facilities with larger detention populations to facilities with fewer detainees. Prior to transport, the agency conducts temperature checks and medically screens detainees for COVID-19 symptoms.”According to ICE, on June 2, 74 detainees were transferred to the Farmville detention center from facilities in Arizona and Florida and quarantined. They were eventually tested after three detainees had confirmed cases. Of the 74 detainees transferred, 47 tested positive for coronavirus as of June 22. There are 412 detainees at Farmville. 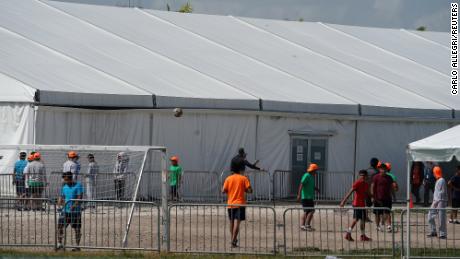 Judge rules migrant children in government family detention centers must be released due to coronavirusDetainees say that despite measures to separate those with confirmed cases, there continues to be intermingling, particularly with the staff members attending those who are separated and then engaging with the general population. Gonzalez told CNN that detainees are also receiving temperature checks twice daily, but that requires placing their faces against a glass that isn’t sanitized between screenings. “They don’t clean it. Everyone still has to go through the same process,” Gonzalez said. “There’s never social distancing. We’re always together. Basically, we’re sharing everything.” ICE pushed back on the claim that detainees had to place their face against a window for screening, saying in a statement: “No medical personnel have directed detainees to place their face against a window, nor is there a medical need for detainees to place their face on a window in order to conduct a temperature check.”The agency also said it is medically screening people who work in the kitchen, which detainees shared was a concern, and providing N95 masks and cloth masks, according to a spokesperson.The spokesperson added that the Farmville Detention Center plans to begin testing the entire detained population by early next week.Detainees are anxiously waiting for more testing, but don’t seem to be seeing improvement for now. “The days are passing and things are getting worse,” Sanchez said. Attorneys continue to raise alarm Months into the pandemic, coronavirus continues to pick up steam, fueling fears among detainees who are confined to facilities similarly grappling with the outbreak. The Department of Homeland Security inspector general found in a June report that while “almost all facility personnel” across a slew of centers said they were prepared to address the virus, they still “expressed concerns if the pandemic continued to spread.”The inspector general similarly found issues related to social distancing, stating in the report that “facilities reported concerns with their inability to practice social distancing among detainees, and to isolate or quarantine individuals who may be infected with COVID-19.”Delia Salvatierra, an immigration attorney based in Arizona, has had eight of her clients test positive at two separate detention facilities in Arizona. “Every single client that I have had in custody during this time has had Covid. Not one has escaped it,” Salvatierra said. “I think from (the Department of Homeland Security) point of view, they’re doing what they can to isolate individuals but the problem starts much earlier. It starts from co-mingling people. There’s no safe way to maintain people in a closed environment, when people are coming in and out, such as the guards and staff,” she added. Earlier this month, lawyers representing a group of detainees at an Arizona immigrant detention center, where Salvatierra had clients test positive, pointed to a letter they said detailed dangerous conditions in custody as coronavirus spreads in the facility.The letter, dated May 18, alleged that social distancing measures have not been put in place at the facility and that detainees continue to clean areas.In some cases, fears and desperation among detainees over the pandemic have given way to protests. At a detention center in Bristol County, Massachusetts, a brawl broke out over a dispute about coronavirus testing. Advocacy groups say hunger strikes have been on the rise since concerns about Covid-19 surged, as have reports of incidents involving use of force, such as the pepper spray that officers fired at the Bristol County facility on May 1.A similar scenario unfolded at the Farmville center this week when detainees protested medical conditions at the facility, according to those in custody. ICE said there was no protest, but conceded there was a “disturbance involving two detainees in a dorm” that required staff to use pepper spray. Across the country, lawsuits have been filed to release detainees and put measures in place to protect those in custody. In the interim, thousands of detainees are left waiting. The National Immigration Project, CAIR Coalition, and Legal Aid Justice Center brought a lawsuit for nine detainees to be released from the Farmville facility in April. “We filed litigation for a group of nine people who are medically vulnerable that we were trying to get out of detention and unfortunately, at the time, the judge didn’t see things our way and didn’t grant the release,” said Sirine Shebaya, executive director of the National Immigration Project, adding that the case is on appeal.

“The circumstances at Farmville right now are a perfect illustration of the ways in which the ongoing transfers that ICE has insisted on continuing are contributing to the spread of coronavirus,” she said. Of the nine who were part of the litigation, only two remain at the center.