(CNN)Hundreds of flights in and out of Beijing were canceled on Wednesday as authorities stepped up measures to rein in a sudden outbreak of coronavirus in the Chinese capital, placing it under a so-called “soft lockdown”.

On Wednesday, Beijing reported 31 new Covid-19 cases for the previous day, bringing the total number of infections over the past six days to 137.The flare-up, linked to the city’s largest wholesale food market, Xinfadi, is the worst coronavirus resurgence in China since the initial epidemic was largely brought under control in March.

The latest outbreak has already spread to nine of Beijing’s 16 districts and four other provinces, not only in neighboring Hebei, but also Liaoning in the northeast, Sichuan in the southwest and Zhejiang on the country’s eastern coast. 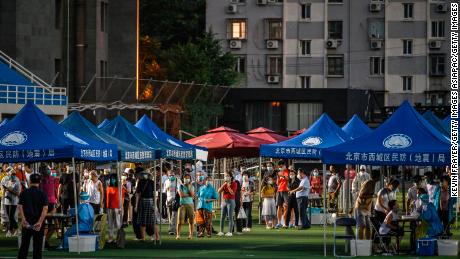 Residents line up at a makeshift coronavirus testing center in Beijing on June 15.To curb the virus from further spreading in the country, authorities banned all residents living in neighbourhoods deemed medium or high risk from leaving Beijing, as well as people connected to the Xinfadi market. So far, the city has 27 areas designated as medium-risk and another area — close to Xinfadi — marked as high-risk.Read MoreOther residents in the city of 20 million are urged not to make non-essential journeys away from the capital, but those who insist on leaving must produce a negative coronavirus test result obtained within a week, according to the municipal government announcement.A growing number of cities and provinces, including Shanghai, have said they will impose restrictions such as mandatory quarantine on people arriving from Beijing, especially those from medium or high risk neighbourhoods.Mass flight cancellationsWhile the Beijing government did not announce the suspension of transportation in and out of the city, hundreds of flights were canceled at Beijing’s two major airports on Wednesday, according to aviation data providers.There was no official announcement from the Chinese government on the flight cancellations. CNN has reached out to Air China, China Eastern Airlines and China Southern Airlines for comment but has not received any response.According to aviation data tracker Variflight, as of 3 p.m. local time Wednesday (3 a.m. ET), at least 630 flights had been or were likely to be canceled at the Beijing Capital International Airport and Beijing Daxing International Airport — around half of all scheduled flights.Air traffic at from both airports had been on the rise since May until the drastic plunge this week, Variflight data showed.Flight Master, another China-based aviation data provider, said 1,255 flights had been scrapped at both airports on Wednesday, accounting for 67% of outgoing flights and 68% of incoming flights.Air China, the country’s flag carrier, announced on social media that 297 flights arriving or departing from the Beijing Capital International Airport were canceled. “Affected by the outbreak in Beijing, there are mass delays and cancellations of arriving and departing flights,” its statement said, without specifying if the authorities had given any orders for the cancellations. 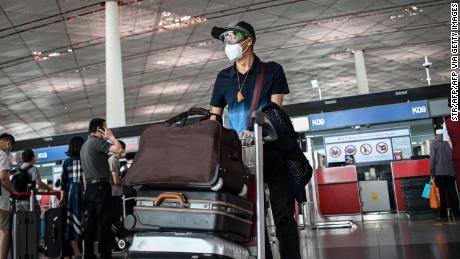 A man wearing a face mask and goggles at Beijing Capital International Airport on June 17.Several domestic airlines, including Air China, China Eastern, China Southern and Hainan Airlines, have promised full refunds to passengers who bought tickets to leave Beijing from this week to the end of June, according to the state-run People’s Daily newspaper.The country’s railway authorities also announced full refunds on all tickets to and from Beijing booked before Wednesday, People’s Daily reported.Earlier this week, the city had already suspended all outbound taxi and car-hailing services, and some long-distance bus routes between Beijing and neighboring provinces.Raised alertDescribing the new outbreak as “very severe,” the Beijing municipal government on Tuesday night raised its alert level to Level 2 — the second-highest in a four-tier public health emergency response system, ramping up restrictive measures across the city. 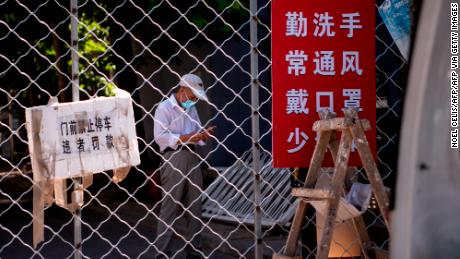 Beijing imposes soft lockdown citywide and tightens outbound travel as coronavirus infections spreadAll kindergartens, primary schools and secondary schools were shut, and students were told to return to online studying — a prevalent practice across China from February to April, when most schools were closed due to the initial coronavirus outbreak.On Wednesday, Beijing officials told a news conference that the city’s university entrance exams will go ahead as scheduled on July 7. Students are required to stay at home for two weeks before sitting the exams, officials said.Companies and factories are allowed to remain open, but employees are encouraged to work from home, according to the government announcement.

The city is also reintroducing strict access rules in and out of all residential communities, requiring visitors to register and have their temperatures checked. This comes after 29 residential communities around Xinfadi and two other food markets in the city were placed under strict lockdowns, after coronavirus cases were confirmed at the markets.