Ford continues to ramp up excitement about the upcoming battery-electric Mustang Mach-E, which is set to go on sale later this year. Now it’s offering new owners of the EV 250.0 kWh of free charging via Electrify America’s DC fast-charging stations using the FordPass charging network. Not a huge amount of energy when compared to Audi’s 1000.0 kWh of free charging for the re-tron, but it’s a nice bonus for those already planning to buy Ford’s upcoming halo electric vehicle.

Depending on the version of the Mach-E purchased, the 250.0 kWh can fill the battery from 10 percent to 80 percent five times for the standard-range variant (75.7 kWh) and three times for the version with extended-range battery (98.9 kWh). The free power is only available at Electrify America stations; the VW initiative is one of the partners of the FordPass Charging network. The network consolidates all these charging partners into a single-payment system so Mach-E drivers don’t have to subscribe to a plethora of networks. New Mach-E owners also get a free two-year subscription to FordPass’s charging feature. 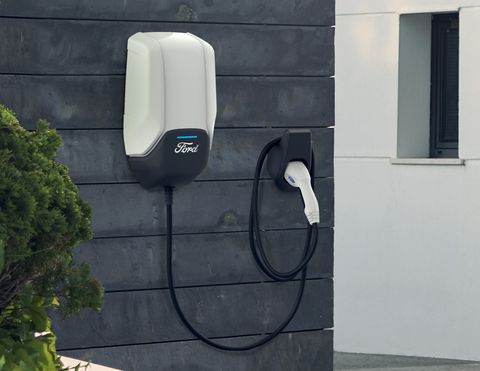 For at-home charging, Ford announced that its Ford Connected Charge Station wall box is now available at dealerships for $799. The automaker said that it should be able to charge a Mach-E overnight. Ford also announced that later this year, Amazon Home Services will install Ford’s home charging station or 240-volt outlets in owners’ homes.

“One of the main opportunities we have is educating our potential customers about road-trip readiness,” said Matt Stover, Ford director of charging. “The 250 kilowatt-hours of complimentary charging we’re offering . . . will give our Mustang Mach-E customers confidence in their ability to plan trips.”