Now 65, she remembered seeing crosses burning in the distance and drinking from a water fountain with signs that read “colored” and “white only.” As she approached the Old Lake County Courthouse, the fear she felt as a girl walking those same streets rushed through her body. 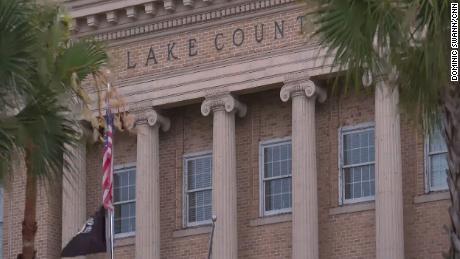 The Old Lake County Courthouse stands a the center of the Confederate statue controversy. “I think about the Black men that were beaten there and tortured there,” Hazelton said.

But she also remembered her grandmother Nellie Virginia Burkes’ wise words, “Fight… for what is right.”Read MoreHazelton has been in the fight of her life for the past two years.It started in June 2018, when she learned that the statue of Confederate General Edmund Kirby Smith was scheduled to move from the US Capitol to the Old Lake County Courthouse. That’s the same courthouse where in 1949 four young African American men, Walter Irvin, Samuel Shepherd, Charles Greenlee and Ernest Thomas — known as the Groveland Four — were accused of a crime they didn’t commit, tortured and subjected to racially motivated oppression. 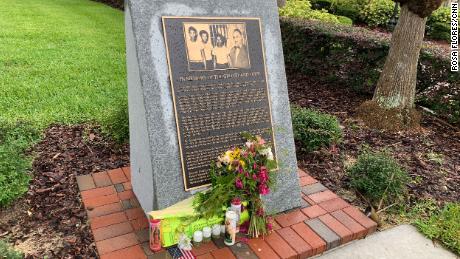 A tribute to George Floyd rests on the memorial erected for the Groveland Four at the Old Lake County
Courthouse. A memorial for the Groveland Four was erected outside the Old Lake County Courthouse last year, when the young men were posthumously pardoned. “The brutality and injustice that these men endured resulted in the wrongful death of Mr. Thomas and Mr. Shepherd, and the unfair incarcerations of Mr. Irvin and Mr. Greenlee,” the plaque on the memorial reads.Standing by the memorial, Hazelton said that moving a Confederate statue into a government-owned building known for its racism and oppression against African Americans was just wrong.”It’s evil and wrong and we shouldn’t have it here in our community,” Hazelton said. The statue was headed to the County Historical SocietyDetermined to figure out how a Confederate statue with no link to Lake County could be moved into the community without public input, Hazelton and a group of residents formed a nonprofit organization called Lake County Voices of Reason. And they set off on a mission to uncover the truth. 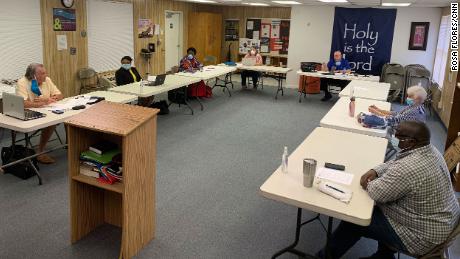 Members of the Lake County Voices of Reason discuss their strategy against the plan to move a Confederate statue into their community. They found that in June 2018, Bob Grenier, the curator of the Lake County Historical Society, requested and applied for the Kirby Smith statue to a Florida Department of State committee in Tallahassee. In a video of the meeting available online through the Florida Channel, Grenier said he had been working to bring the statue to Lake County for two years. He said he had the support of all five Lake County Commissioners.”I’ve got emails from them saying ‘Go get it Bob. Get the statue, bring it back to Lake County,'” Grenier said from a podium. A year ago, eight mayors, representing 146,165 residents — or 40% of the population in Lake County — wrote a letter to Florida Gov. Ron DeSantis opposing the statue’s arrival in their county. 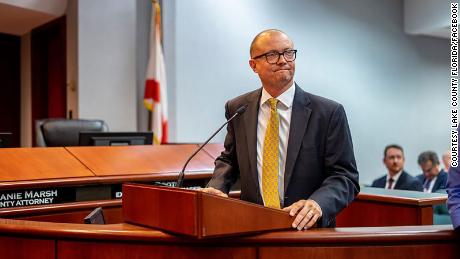 A Florida county declared itself a 'Second Amendment Sanctuary.' It's not the first to do so “Confederate Gen. Edmund Kirby Smith had no connection to Lake County and his (statue’s) presence would create a negative and hurtful message in our community,” the letter read. Kirby Smith was born in St. Augustine, located in St. Johns County, on May 16, 1824. His statue was moved to National Statuary Hall at the US Capitol in 1922. In 2019 DeSantis officially requested the Kirby Smith statue be replaced by a statue of Dr. Mary McLeod Bethune, an African American civil rights activist and educator. During a 2019 Lake County Board of County Commissioners meeting, residents spoke for and against the statue.”As a descendent of Confederate veterans and slave owners, the least I can do to atone for the pain my family has caused them is to oppose this statue,” Grace Arnold said.”These statues only exist in a sick attempt to preserve human slavery,” Choice Edwards said.Commission Chair Leslie Campione defended the statue, saying the display would not glorify the man nor the Confederacy.”It will describe Smith’s military service and will tell about his career as a professor, as a botanist following the Civil War,” Campione said. “And his friendship with Dr. Alexander Darnes, who became the first Black doctor in Jacksonville.” “Alexander Darnes was Kirby Smith’s slave. Period,” Hazelton said. She remembered her grandmother’s wordsAs news spread of Confederate statues tumbling across the US in the wake of George Floyd’s death, Hazelton broke down in tears. But she wasn’t defeated. She was ready to keep fighting.”I will lay my body across the front of that [courthouse] and they will have to arrest me before they put the statue there,” Hazelton said.When asked what made her keep going, Hazelton said it was those wise words from her grandmother.”My grandmother was illiterate, but my grandmother said, ‘You fight,'” Hazelton said. “She said, ‘You fight for what is right or you lay down for what’s wrong.'” 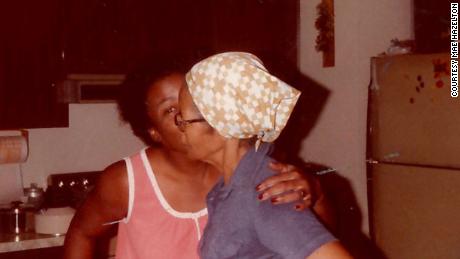 Mae Hazelton gives a kiss to her grandmother, Nellie Virginia Burkes. A few days after CNN interviewed Hazelton and requested interviews with Campione and Grenier, which were denied, Campione had a change of heart during a public county commissioner meeting.”I believe that this entire situation has created really unnecessary strife and division in our community and I know that it’s harmed my relationship with some of my friends in the Black community,” Campione said last Tuesday.Hazelton was present at the meeting and says the tension in the room was palpable. Finally, Lake County Commissioners announced a plan to ask Florida to find the statue a new home. 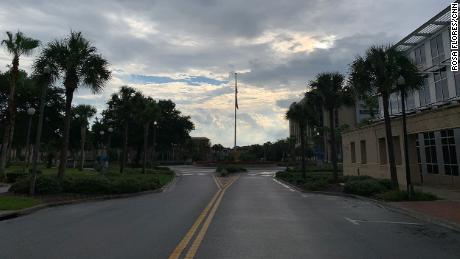 An American flag on West Main Street in Tavares, Florida.
Hazelton says her voice was “sick with emotion” because “African Americans don’t prevail a lot in Lake County” and that day, they had won the fight.

“We are in an inflection point in this country and it is painful. Commissioner Campione, I heard the pain in your voice this morning. Thank you,” Hazelton said from the podium during the public comment period. “But nothing is as painful as staying at a point where you know that’s not who we are.”Correction: A previous version of this story misstated the first name of Mae Hazelton in a caption.