Mulvaney asserted in the CNBC.com op-ed that “the current economic crisis is public-health driven,” so typical economic incentives won’t be as effective, and that “(a)ny stimulus should be directed at the root cause of our recession: dealing with Covid.” “I know it isn’t popular to talk about in some Republican circles, but we still have a testing problem in this country,” Mulvaney wrote. “My son was tested recently; we had to wait 5 to 7 days for results. My daughter wanted to get tested before visiting her grandparents, but was told she didn’t qualify. That is simply inexcusable at this point in the pandemic.”

Mulvaney, now the United States’ special envoy for Northern Ireland, served as Trump’s White House chief of staff from January 2019 until March 2020 when he was replaced by former Congressman Mark Meadows. Before that, Mulvaney was director of the Office of Management and Budget as well as acting director of the Consumer Financial Protection Bureau. He has remained largely loyal to Trump, making his op-ed all the more noteworthy. 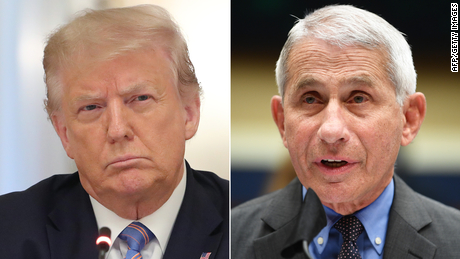 White House takes aim at Fauci but Trump has no current plans to fire him, source saysRead MoreAsked for the White House’s reaction to Mulvaney’s op-ed, White House press secretary Kayleigh McEnany said: “Our reaction is that we’ve tested — we lead the world in testing. We’ve done more 40 million tests. It’s an extraordinary number.”Citing more of the latest US coronavirus testing numbers, McEnany added: “Leading the world in testing, I would say, means we’re doing a pretty good job.”President Donald Trump and his White House have frequently touted the “success” of coronavirus testing in the United States. But as the number of positive cases has grown, so has the number of individuals wanting to get a test. And some states, labs and public health departments are now warning that turnaround times for diagnostic testing have slowed.On NBC’s “Meet the Press,” Adm. Brett Giroir, who has been tasked with leading the federal testing strategy, acknowledged lags in commercial labs. “We need to decrease the time to turn around those results, and we have a number of efforts,” he said.

In his op-ed, Mulvaney also called to an upcoming stimulus package to include more direct funding for research and said he thought a payroll tax cut and tying capital gains to inflation were “likely a politically viable package.” But Muvlaney, a fiscal hawk, also cautioned that there “are very real risks to additional stimulus,” including the threat of inflation and underdelivering to voters ahead of an election.