(CNN)Five people have been charged with hate crimes in Virginia and the black pastor they are accused of attacking is no longer facing charges for pulling out a gun during the incident.

Leon McCray Sr. was arrested and charged with brandishing a firearm during a June 1 incident in the town of Edinburg in Shenandoah County, a news release from the Shenandoah County sheriff said.McCray, a 61-year-old pastor at Lighthouse Church & Marketplace Ministries International, told CNN affiliate WHSV that the incident started when he noticed two people dragging a refrigerator toward the dumpsters at an apartment building he owns in Edinburg.

When he confronted them and asked them to leave they “got irate” with him before leaving and then returned with three more people who began to threaten him and use “all types of racial slurs,” McCray told WHSV. 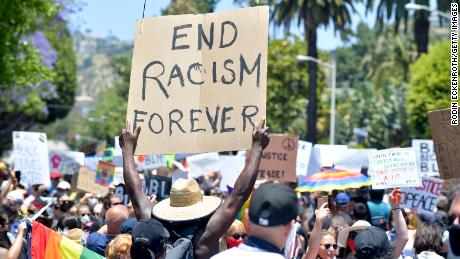 Black Lives Matter protests across the US and worldHe told the station the group began using “racial epithets and the n-word,” saying, “your Black life, your M-F Black life don’t make, it doesn’t make a difference in this country, it doesn’t make a difference to me, and we will kill you.”Read MoreMcCray pulled out his weapon after the group surrounded him and one man began headbutting him, he told WHSV.”It got to the point where this is really getting really, really bad,” he told the affiliate. “I couldn’t leave, I couldn’t do anything, and with the threats, I felt to save my life, I had to draw my gun.”However, when deputies arrived they arrested McCray and no one else. Two supervisors in the sheriff’s office have been placed on unpaid administrative leave and an administrative review has been launched into their handling of the incident, Sheriff Timothy Carter said in a video message.Carter met with McCray on June 3 to discuss the incident. Following the meeting, Carter met with the Shenandoah Commonwealth’s Attorney, who agreed that the charge against McCray was unwarranted and dropped it.”After talking with him about the incident, it was apparent to me that the charge of brandishing was certainly not appropriate,” Carter said. “If I were faced with similar circumstances, I would have probably done the same thing.””I want the people of Shenandoah County to know I and the Sheriff’s Office staff appreciate and care about the minority communities, and especially our black community, in Shenandoah County,” he said. “Also, I continue to support and recognize the importance of your Constitutional rights, especially your 2nd Amendment right to protect yourself and your family.”All five people accused in the attack were arrested Thursday and face a variety of charges related to the attack, including hate crime charges, according to a news release from the sheriff’s office.Donny Salyers, 43, and Dennis Salyers, 26, were charged with felony abduction, assault-hate crime, assault by mob, and assault and battery. Farrah Salyers, 42, was charged with felony abduction, assault-hate crime, and assault by mob. Christopher Sharp, 57, was charged with felony abduction, assault-hate crime, assault by mob, and trespassing. Amanda Salyers, 26, was charged with assault-hate crime, assault by mob, and trespassing.

The Salyerses and Sharp are being held without bond and the investigation is ongoing, the sheriff said.CNN has not been able to determine whether any of those charged have legal representation.