Hong Kong (CNN)Relations between China and India have always been complicated.

During British colonialism, India was the source of opium foreign traders forced onto Chinese markets, sparking war between the UK and the Qing Empire that ended in humiliation for China. Since independence, India’s relations with its largest neighbor have been tested by issues such as Tibet, Pakistan and the countries’ shared Himalayan border. This week, that border blew up into renewed conflict, in the bloodiest engagement in 40 years, which left more than 20 soldiers dead after a brutal fight with fists and clubs high in the mountains amid freezing temperatures and scant oxygen.

While both governments are now scrambling to deescalate, the conflict could provide the final push for a pivot already begun by New Delhi, away from Beijing and towards China’s traditional rivals, the United States and Japan, as well as a growing regional one, Australia. As India seeks to push back against what many in the country view as Chinese aggression, it will rely on these allies more than ever. “The sacrifice made by our soldiers will not go in vain,” Indian Prime Minister Narendra Modi said Wednesday. “India’s integrity and sovereignty is supreme for us, and no one can stop us from defending it. Nobody should have an iota of doubt about this. India wants peace. But when provoked, India will give a befitting reply.”Read MoreRahul Gandhi, leader of the main opposition Congress Party, put it more bluntly: “How dare China kill our soldiers? How dare they take our land?” 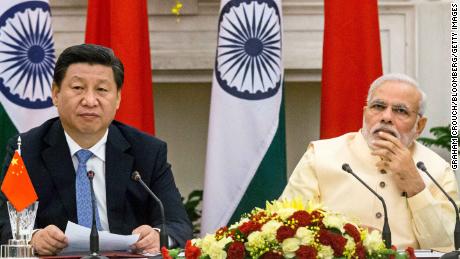 Chinese President Xi Jinping and Indian Prime Minister Modi seen together during a meeting in September 2014. Encircling ChinaIn an editorial Wednesday, the influential Hindustan Times said that “China wants to limit New Delhi’s power and ambition; it wants India to accept Beijing’s primacy in Asia and beyond.” In response, the newspaper urged, New Delhi should “double down on its partnership with the US, make Quad … a more permanent arrangement, and be a part of any club that seeks to contain Chinese power.” The Quad, or Quadrilateral Security Dialogue, is an informal strategic forum for the US, Japan, Australia and India, featuring semi-regular summits, information exchanges and military drills. While not a formal military alliance like NATO, it is seen by some as a potential counterweight to growing Chinese influence and alleged aggression in Asia-Pacific. While members have emphasized the more benign aspects of the relationship, such as recent cooperation on the coronavirus pandemic, the potential for military encirclement by countries has not gone unnoticed by Beijing. As early as 2007, when the first Quad meetings were proposed, China issued formal diplomatic protests to all parties involved, and later that year Australia pulled out over fears of offending Beijing, and the alliance was put on hold until 2017, when meetings resumed, in large part due to growing concerns over Chinese advances in the South China Sea. Potentially, an anti-China bloc led by the US could be far larger than the Quad. During a telephone call earlier this month between Modi and US President Donald Trump, the American leader invited India to join the next G7 summit. They also, according to White House spokeswoman Kayleigh McEnany, discussed “the situation on the India-China border.” Trump has previously spoken of wanting to expand the traditional grouping of mostly European and North American states to include Washington’s allies Australia and South Korea, as well use this year’s planned meeting to “discuss China’s future.” India has traditionally been wary of getting too close to the US, seeking to balance that relationship with strong economic — if not always diplomatic — ties to Beijing. Amid growing pressure on its border, however, and what appears to be a strong personal bond between Trump and Modi, this could be the perfect time for such a pivot. Greater Indian participation in both the Quad and other military alliances with the US would have benefits for Washington, according to foreign affairs analyst Amrita Jash, who wrote this week that “India’s strong foothold in the Indo-Pacific provides a counterbalance to China’s growing footprint in the Indian Ocean.”

Not without costBoth Delhi and Beijing have spoken of the desire to deescalate and preserve a peaceful relationship following this week’s clash in the Himalayas, but many experts are skeptical about how feasible, or sustainable this is. Aidan Milliff, an expert on political violence and South Asia at the Massachusetts Institute of Technology, predicted this month that the latest conflict could “portend the development of a Sino-Indian situation that reflects an ‘ugly stability’ between India and Pakistan: persistent low-level conflicts and political-military crises that simmer below the threshold of conventional war.”Already shaky ties between Beijing and Delhi had already been harmed by the coronavirus pandemic, with many in India blaming China for its initial mishandling of the crisis and Chinese officials frustrated by their Indian counterparts’ perceived failure to express support for Beijing at the World Health Organization and other international forums. Any major shift towards the Quad or Washington alone would likely only take place if Delhi believes relations with Beijing are beyond repair, however, as they could come with high costs for both India and China. Under Modi, India’s economic engagement with China has been increasing. Together, the two countries account for 17.6% of the global economy. But although China is India’s largest trading partner, their estimated $84 billion bilateral trade in 2017/18 was a mere fraction of the US-China trade volume, which stood at almost $600 billion.Before the coronavirus pandemic, China was gradually emerging as a major foreign investor in the growing Indian market, but that trend has been halted by new investment rules passed by Delhi widely seen as aimed at Chinese firms. Economic pain is not the only thing that will be jointly shared. While Beijing may be loathe to see India cosying up to the US and Japan, it can respond by increasing support for Delhi’s major rival: Pakistan. China has close economic, diplomatic and military ties with Pakistan, making it one of the nation’s closest allies in the region. Between 2008 and 2017, Islamabad purchased more than $6 billion of Chinese arms, according to think tank CSIS. China has also invested billions in the China-Pakistan Economic Corridor, an integral part of Xi’s Belt and Road trade and infrastructure mega-project.Protecting that corridor was seen by some analysts as a driving factor behind the recent spat in the Himalayas, another factor in which was recent Indian moves over Kashmir, in which China supported Pakistan in a failed attempt to censure Delhi at the United Nations. Similarly, China has made diplomatic and economic inroads in countries traditionally considered as within Delhi’s sphere of influence, including Nepal, Sri Lanka and Bangladesh.India’s South Asian neighbors have also increasingly looked to China for assistance during the coronavirus pandemic, accelerating a trend that seen Beijing invest heavily in the region.

The willingness of Nepal, in particular, to work with Beijing has led to concerns in Delhi of potential geopolitical realignment. Nepal, which is sandwiched between India and China, and has recently butted heads with its southern neighbor over a decision to approve a revised map that includes areas claimed by Delhi. Part of the problem in the region are the messy, widely disputed borders that many of the countries share. If relations continue to worsen between Beijing and Delhi, however, they may seem like nothing compared to the nightmare of geopolitical complications that could arise across all of Asia-Pacific.