Hong Kong/London/London/New York (CNN Business)The Dow and the US stock market rallied back Friday after the sharpest selloff in three months.

Stocks were hammered on Thursday as fears about an increase in coronavirus cases and a somber economic outlook from the US Federal Reserve forced investors to confront risks that had been pushed aside during the huge market rally that has taken place since March.

But fear of missing out is a powerful motivator to buy stocks, and the US market was set for a rebound.All three major stock indexes traded sharply higher on Friday, after recording their worst day since March 16, the height of the coronavirus selloff, on Thursday. For the Nasdaq, the drastic collapse came after three straight days of all-time closing highs.The Dow (INDU) was up 3.1%, or 775 points. The S&P 500 (SPX) and the Nasdaq Composite (COMP) both rose 2.5%.Read MoreNo major US economic data was released on Friday, but a preliminary reading of consumer sentiment in June showed a stronger than expected improvement over the prior month, according to the University of Michigan.Consumer sentiment fell off a cliff in April, but has clawed back some ground since.”The turnaround is largely due to renewed gains in employment, with more consumers expecting declines in the jobless rate than at any other time in the long history of the Michigan surveys,” said Richard Curtin, chief economist at the Survey of Consumers.Global stocks were mixed Friday after fears of a sharp increase in coronavirus cases.Major indexes in Asia closed with losses. Japan’s Nikkei 225 (N225) ended the day down 0.8% after recovering from a much larger drop in early trading. Hong Kong’s Hang Seng (HSI) declined 0.7%, while China’s Shanghai Composite (SHCOMP) ended little changed. 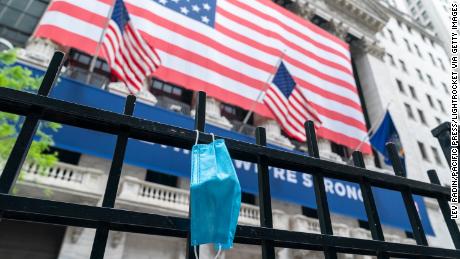 Wall Street's party is over. Coronavirus fears are backBut the mood was more positive in other regions. European exchanges recovered from Thursday’s declined, with the FTSE 100 (UKX) up 1.5%, while Germany’s DAX (DAX) climbed 0.9%. France’s CAC 40 (CAC40) added 1.6% in the European afternoon. Kevin Giddis, chief fixed income strategist at Raymond James, said Thursday’s sell-off was prompted by the realization among many investors that the US economy will take longer to recover from the pandemic than expected.”The risk markets got a huge boost last week with the reopening of the US economy and a better-than-expected jobs report,” he said. “However, the timing [of the recovery] may not be as optimistic as the markets first thought.”The US economy added 2.5 million jobs in May, while economists had predicted more job losses. Although that is good news, the gain comes on the heels of 20.7 million jobs vanishing in April.Jeffrey Halley, senior market analyst for Asia Pacific at Oanda, said that US markets are likely to continue to set the tone for global stocks. “All eyes will be on the US … and whether the correction continues or is forgotten as quickly as it began,” he wrote in a research note. “A sensible case can be constructed for either outcome and a wait and see strategy is the best one.”Oil markets also took a break from a steep selloff, recovering from earlier losses. US oil was up 1.5% at $36.91 a barrel following a more than 8% drop in the prior session.The international oil benchmark climbed 1.9% to $39.24 a barrel.

The rout in the oil market was likely a response to fears about the uptick in infections in the world’s largest oil consuming economy, according to Stephen Innes, chief global markets strategist at AxiCorp. Any new shutdowns to contain the virus would slam energy demand again.— Jazmin Goodwin and Tami Luhby contributed to this report.