(CNN)Police arrested six people Friday night at a protest near the Robert E. Lee monument in Virginia’s capital, after some people fired paintballs and threw things at officers trying to disperse the gathering, authorities said.

The protest, a mile from downtown Richmond, was the latest in a string of daily gatherings near the monument, where people have been demonstrating against police brutality and racial injustice, CNN affiliate WTVR reported.The presence of the Confederate general’s statue also has been a source of tension, with some people urging its removal and some people suing to keep it. 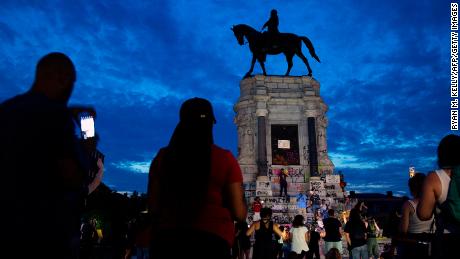 Honoring the unforgivable Richmond police and Virginia state troopers said they arrived at the monument around 10 p.m. to disperse a crowd of about 75 to 100 people because the monument’s park is closed after sunset. Although some protesters then left, some remained, and a person or people fired paintballs, hitting four officers and one trooper, police said. Read MorePolice then declared the gathering unlawful and said anyone who stayed would be arrested.People also threw things at officers, police said. At some point, people launched fireworks at troopers, according to Virginia State Police.At least one pyrotechnic “spun out of control” and hit a person in the median, state police said.In body camera footage released by state police, at least one pyrotechnic is seen flying well over troopers’ heads.By 11:35 p.m., police had arrested five adults and a juvenile. All six were held on initial charges of unlawful assembly or trespassing. The juvenile also was held on a charge of assaulting a law enforcement officer, accused of firing paintballs, police said.A Richmond police officer used pepper spray once “due to ongoing assaults from the crowd,” police said.Tension in RichmondRichmond, like many cities around the country, has seen numerous protests against since the death last month in police custody of George Floyd, a 46-year-old Black man, in Minneapolis. 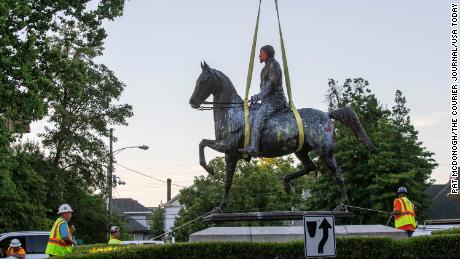 Confederate statues are coming down following George Floyd's death. Here's what we knowRichmond demonstrators often have gathered near monuments for Confederate figures such as Lee, whose statue there depicts the general riding a horse. Richmond was the capital of the Confederacy during the vast majority of the Civil War.

Confederate monuments have been the subject of nationwide debate, particularly since Dylan Roof killed nine African Americans in a South Carolina church in 2015. It has flared up again since Floyd’s death in May — as demonstrators demand an end to police brutality against people of color, some also argue for the monuments’ removals, pointing to the Confederacy’s legacy of slavery. On June 10, protesters in Richmond brought down a statue of Jefferson Davis, the Confederacy’s President. People also tried to pull down a statue of Confederate army Gen. J.E.B. Stuart in Richmond on June 21.