What do Prince, Snoop Dogg, and Vin Diesel have in common with the Kia Optima? They’ve all changed their names. That’s right. The mid-size sedan formerly known as Optima in the U.S. will officially be renamed K5 when the all-new 2021 model goes on sale this summer.

We’re not particularly surprised by the name change. The rumors started swirling soon after we got our first glimpse of the newly designed sedan, and then they were all but confirmed by a recent EPA filing. Instead, we’re excited that Kia has finally put an end to the speculation and revealed significant details about what we Americans will get from the car’s fifth generation.

The K5 rides on the latest iteration of the company’s modular N3 platform, which also underpins its corporate counterpart, the Hyundai Sonata. This gives the K5 a new set of dimensions compared with its predecessor. It’s a whole inch wider, 0.8 inch lower, and 2.0 inches longer overall (193.1 inches total). Its wheelbase is also stretched by 1.8 inches, to 112.2 inches, which contributes to the sedan’s impressive back-seat space, which we experienced during our first drive of the Korea-spec K5.

The U.S. version is powered by a standard turbocharged 1.6-liter inline-four, making 180 horsepower and 195 lb-ft of torque. The EPA estimates it’ll earn up to 29 mpg city, 38 highway, and 32 combined. While this setup pairs with an eight-speed automatic transmission and standard front-wheel drive, the sedan will also be offered with all-wheel drive for the first time. However, that option won’t be available until later in the year. Once that model joins the roster, the K5 will be ready to compete with the growing number of family sedans that have added this popular feature, including the Nissan Altima and the Toyota Camry.

While mainstream audiences will be most excited about the availability of all-wheel drive, which is something that the Sonata doesn’t currently offer, we’re more pumped about the performance potential of the new GT model. Sure, it’s not quite as exciting as the rear-drive-based Kia Stinger and its 365-hp twin-turbo V-6, but we expect the K5 GT to be more affordable. It features a turbocharged 2.5-liter inline-four that generates 290 horses and 311 lb-ft of twist. Unlike the standard four-cylinder engine, the larger version hooks up to an eight-speed automatic with a dual-clutch setup, which was developed in-house. Kia estimates the GT will accelerate from zero to 60 mph in 5.8 seconds. That’s a full second quicker than the last high-output Optima we tested, which had a 245-hp turbo 2.0-liter four-pot.

The automaker also looks to optimize the K5’s agility with a sport-tuned suspension and improve its braking and cornering performance by giving it 19-inch wheels wrapped in sticky Pirelli P Zero summer tires. The company says these tires are also mounted on the car’s 18-inch rims, which suggests that the less powerful GT-Line model will wear the upgraded rubber, too. After all, the two GT trims already share a distinct mesh grille design, chrome dual exhaust tips, and a unique flat-bottom steering wheel.

Our experience driving the K5 in Korea gave us the opportunity to appreciate its stylish sheetmetal and admire its upscale interior up close. The cabin’s attractive materials and improved sound deadening were duly noted. The version we’re getting has an equally sophisticated dashboard that houses a standard 8.0- or optional 10.3-inch touchscreen infotainment system. Although the larger interface allows customizable profiles and the ability to connect two Bluetooth devices simultaneously, oddly it’s not compatible with the newly available wireless Apple CarPlay and Android Auto, which the smaller screen is. 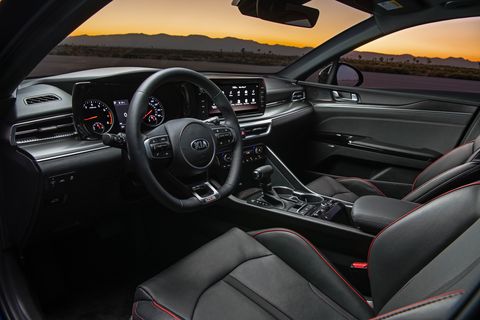 The 2021 K5 can be fitted with a 12-speaker Bose sound system, enhanced voice-recognition software, improved wireless charging, and new Smart Key functions. These include the ability to remotely start the engine, preset the standard dual-zone climate control, and even open the trunklid without having to use your hands.

Every K5 comes with standard driver-assist technology, including automated emergency braking and lane-keeping assist. Of course, it also has popular options such as blind-spot monitoring and rear cross-traffic alert. There’s also the option to add automated emergency braking that detects oncoming traffic during left-hand turns and adaptive cruise control that uses the navigation system to recognize when the vehicle is heading into a corner. One of its more innovative features is called Safe Exit Assist, which alerts occupants of approaching vehicles before they get out. The system can even lock the rear doors if the car is equipped with the available power child lock.

The 2021 K5 will initially be offered in four trim levels: LX, LXS, GT-Line, and EX. The hotly anticipated GT model will follow. Kia hasn’t released pricing yet, but we expect it to start around $25,000 when it goes on sale later this summer.